Some thoughts on "Reassembling the Economic"

Kenneth Liparito recently published an essay on “Reassembling the Economic: New Departures in Historical Materialism” in American Historical Review.
1.
Lipartito understands North, Wallis and Weingast very differently than I do.

According to Lipartito
“In Violence and Social Orders, North and his co-authors look back over the centuries, concluding that economic growth is fostered by “open access orders.” In these societies, the state relinquishes its monopoly of violence, allowing private institutions to flourish.” (108)
He claims that
“A more balanced assessment of institutions comes from the pens of Daron Acemoglu, an MIT economist, and James Robinson, a Harvard political scientist. In Why Nations Fail, they ambitiously survey world history, cataloguing the political and institutional conditions that lead to good or bad economic outcomes. The pattern they uncover is similar to North’s closed versus open access orders. The main difference is that closed societies, dominated by elites who refuse to share resources and wealth, cannot be blamed solely on the state. Private actors are equally avid in pursuit of rents, and frequently create the type of state that serves their interests. “Wealth creators” in all societies are vested in protecting their positions, and their wealth can be translated into political power.”

In my reading of NWW I don’t see an argument that the state relinquishes its monopoly on violence. To the contrary, what the state relinquishes is direct control over access to and allocation of resources. You don’t get a charter because you are a friend of the King or have connections in Albany; you get a charter because you agree to abide by the same rules as everyone else that gets a charter. The state very much maintains its authority to enforce these rules. The issue is not state versus private power so much as it is getting a state that effectively promotes economic growth.  McCloskey has described her approach to modern economic growth as a story of how culture evolved to encourage more people to “Have a go.” NWW is more about the institutional side of that. By the way, I think both matter, and I know that Doug thought both mattered.

2.       I think Lipartito’s failure to appreciate the recent work by economic historians on the role of the state also limits his view of recent work on the Great Divergence. First it should be noted that recent work suggests that the evidence does not really support a divergence as late as Pomeranz first argued. On the other hand, there is more attention to the diversity of both the European and Asian experiences, and research has definitely moved away from simplistic stories of despotic governments inhibiting growth. The most rapidly growing countries during the early modern period also seem to have been the ones with the most well developed central governments in terms of taxing and spending.  Consequently, economic historians are still very much interested in the role of the state but are more focused on the specific activities they engaged in. See, for instance, recent work by Dincecco; Johnson and Koyama; and Vries; and  Broadberry.
By the way here is Patrick O’Brien on Ten Years of Debate on The Great Divergence after ten years. More generally, a lot of work by O’Brien and others (Broadberry, Deng, and Ma) can be found in the LSE Economic History working papers here.

3.       This is obviously a pet peeve of mine. Lipartito gives far too much credit to the New Historians of Capitalism. For instance, he suggests that because of their work we no longer see Southern slave holders as pre-capitalist the way that Genovese did. The only way to make this statement is to accept the false historiography offered by people like Edward Baptist, who tries to hide the fact that economic historians, going back to the late 1950s, had been accumulating evidence that slave holders acted as profit maximizers. Beckert writes Fogel completely out of the historiography of slavery in the United States. This isn’t just a matter of disagreement about how extensive the references to the prior literature should be. If other people have previously made one of your central arguments you must cite them. If there were a Ten Commandments for academics I am pretty sure that would be one of them. It is also not a conflict between the methods of economists and historians; the podcast Historically Thinking has a great discussion between two historians, Al Zambone and Bob Elder, about the troubling implications of Baptist’s historiography. One can also challenge the assertions about what the new historians of capitalism have brought to the table. I have noted before that Beckert’s book reminds me of the old saying that “There is much here that is new and much that is interesting. Unfortunately, that which is new is not interesting, and that which is interesting is not new.” The interesting parts are the discussions of the industrial revolution (mostly Robert Allen’s theory), the role of force in promoting trade (Findlay and O’Rourke, and others, have made this argument); the capitalist nature of slavery (Conrad and Meyer and Fogel and Engerman said this a long time ago). What’s new is the argument that cotton, slavery, and empire were not just important parts of economic history, they were the key to how the west got rich and capitalism was born. But this is the part of the argument that is least substantiated by evidence.

4.       I’m not sure that Lipartito has found the best way forward. This is in large part because I am not entirely sure what he is trying to say: 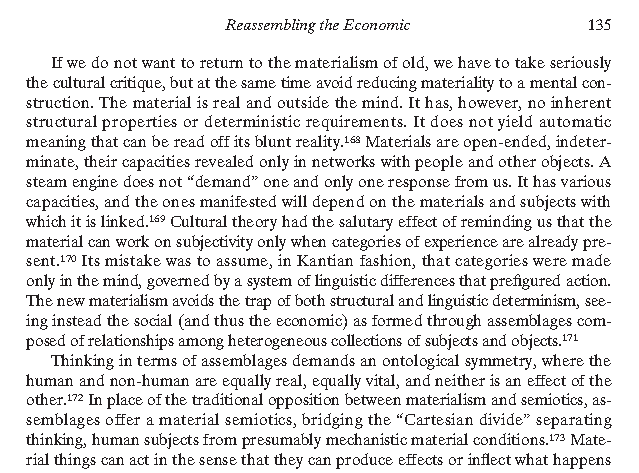