I’m going to start a new discipline called behavioral physics. Unlike traditional physics, which assumes that objects just fly apart from each other, behavioral physicists recognize that a phenomenon they call “gravity,” prevents this from happening.  Or maybe I will create behavioral evolutionary biology based upon the concept of natural selection, rather than the assumption that everything just stays the same, which traditional evolutionary biologists rely on. The way a physicist or biologist would feel reading those sentences is the way that I feel most of the times I read about behavioral economics.

The latest irritation is an article from the New York Times about getting doctors to stop over-prescribing antibiotics. Getting doctors to stop over-prescribing antibiotics is a good thing. Personally, I worry more about the negative consequences of overuse of antibiotics than I do about the negative consequences of the overuse of painkillers. On the other hand, their suggestion that they are able to solve this problem because behavioral economics has remedied the flaws of traditional economics is nonsense.

They describe how various attempts to get doctors to stop prescribing unnecessary antibiotics have failed because they “are all based on the assumption that physicians are rational agents who will do the right thing if provided proper information and incentives. But,” they ask, “what if doctors are a little irrational, like the rest of us? They may over-prescribe antibiotics out of an unrealistic fear that the patient could eventually develop complications and need them, or because it is easier than arguing with a patient who insists on getting them.” The situation they just described is practically a definition of a rational choice. Prescribing the antibiotic has a benefit for the doctor (the patient is happy) and no cost to the doctor.

Nevertheless, they go on to explain that “Over the last few years, our research team has developed several new approaches to reducing unnecessary antibiotic prescribing, drawing on insights from behavioral economics and social psychology. These disciplines acknowledge that people do not always behave rationally and are strongly motivated by social incentives to seek approval from others and compare favorably to their peers.” I have no idea what they mean by rational.  There is nothing irrational about being motivated by social incentives or wanting to compare favorably with peers. One of the characteristics of traditional economics is that economists don’t care what your preferences are, or where they came from.The only thing that is really required for rational behavior is that you respond in predictable ways to changes in the costs and benefits of a choice, which brings us to the interventions they introduced.

In one of their interventions “whenever doctors prescribed an antibiotic that was not clearly called for by the diagnosis, the electronic health record system asked them to provide a short “antibiotic justification note.”” Wait a minute, did they just say that they increased the cost to the doctor of prescribing an unnecessary antibiotic, and doctors chose to write less unnecessary prescriptions. Let me see if I’ve got this straight. As the cost of doing something increases, other things equal, people will do it less. Thank God for behavioral economics. If only someone had thought of this before, they could have given it a name like “the law of demand” and taught it in every principles of economics course.
Next week, I think I’ll invent behavioral history, which, unlike traditional history, relies on critical analysis of primary sources. You can play along too. It’s easy. Take any discipline, x. Identify one of the primary features of that discipline, y. Assert, contrary to all evidence, that x does not do y. Claim that the new discipline “behavioral x” does y. Repackage some standard results from x as startling new results of “behavioral x.”

Here is an article in the Chronicle of Higher Education about Deirdre McCloskey. I have to say that I feel the same way about Deirdre’s recent work that Jim Holt does: "She has read the library, and won’t let you forget it." I am afraid many people no longer enjoy listening to her, even when she might be right. The problem is less the move away from cliometrics and toward culture than it is the voice that she chooses to use. Here, for instance is Noah Smith’s reaction to McCloskey’s review of Piketty.

This is a long but fascinating story about the economic historian Nathaniel Leff.
Posted by B. H. at 11:02 AM No comments:

I am working on a paper about trust company failures in New York State between 1875 and 1925, which I will be presenting at the meeting of the Economic and Business History Society in Montreal. I ran across a bunch of illustrations stored on my computer that I had collected while working on the Panic of 1907. Since they did not make it in to the paper in Business History Review  (here is an earlier ungated version) I decided to post some of them here.

Here are two maps showing the location of trust companies in Manhattan in 1907. They were created by Karen Hogan, who was a Geography major here at the University of Mary Washington. They illustrate the geographic difference between the traditional downtown trust companies and the uptown trust companies that experienced most of the runs. 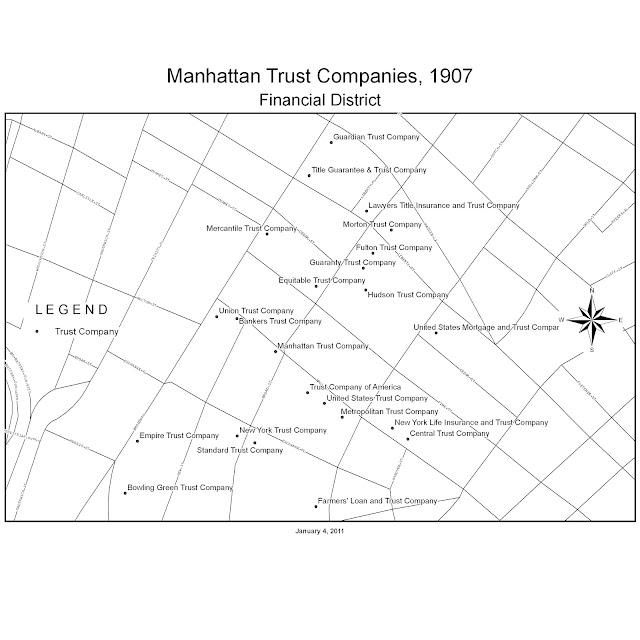 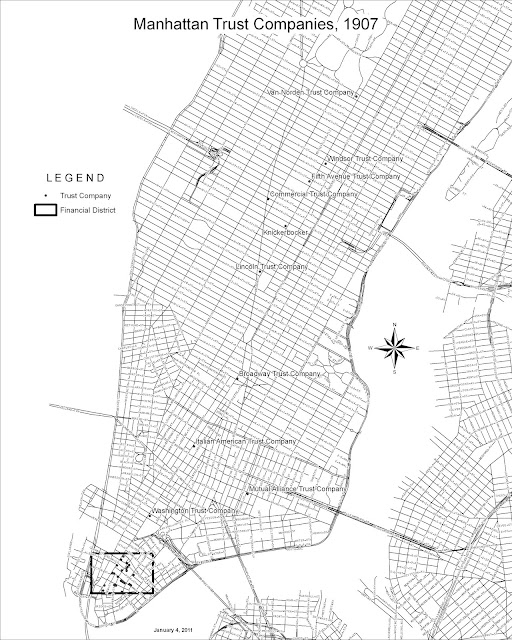 These two are pictures of runs on the Trust Company of America and the Lincoln Trust Company from the New York Tribune on October 24 and 25, 1907. 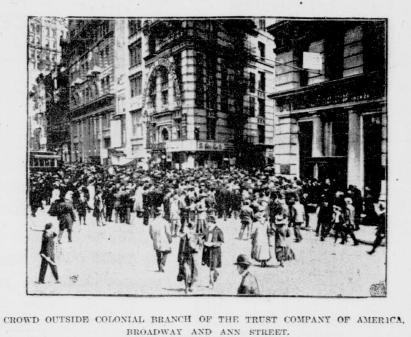 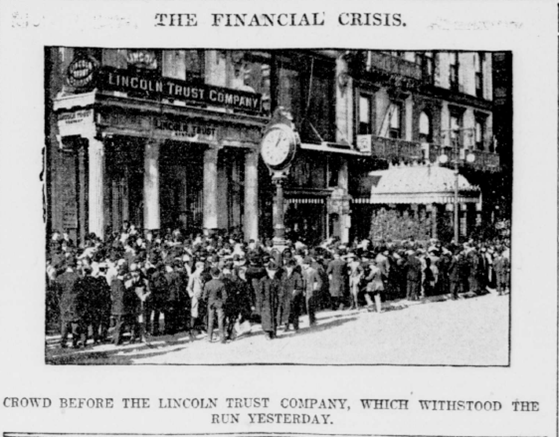 Here are two pictures of the main office of the Knickerbocker Trust Company. One shows how it looked in 1893; the other shows how the main branch looked in 1907. They illustrate the rapid growth of the first of the uptown trust companies. 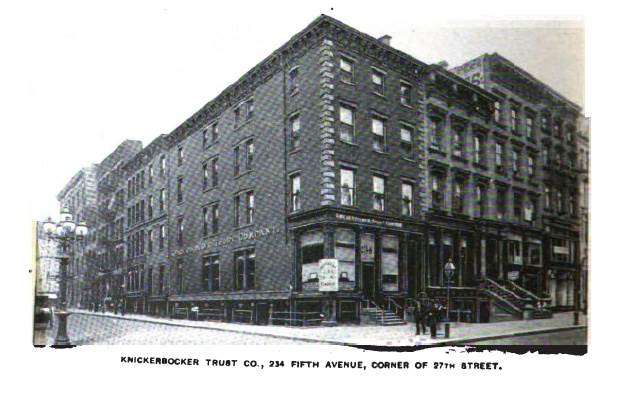 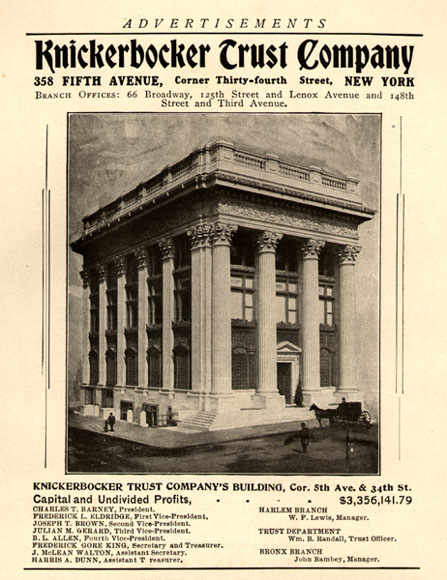 This is an advertisement from the Van Norden Trust Company, the furthest uptown of the uptown trust companies. It illustrates how much their strategy differed from the focus of traditional trust companies on business clients. 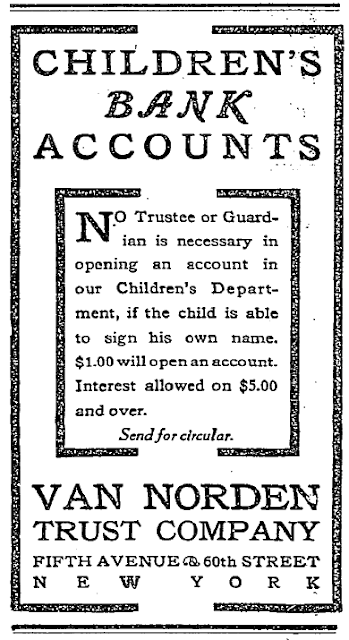 Recent Essays on Slavery and the "New" History of Capitalism

Robert Wright asked Does Enslaving Others Help the Economy or Not? at a Historians Against Slavery Symposium. He argues that the claim that slavery was the driving force behind economic growth is both wrong and potentially dangerous:

“These good folks are trying to lay the grounds for reparations but at the same time putting living people at increased risk of enslavement by providing developing world officials with yet another reason not to clamp down on human trafficking, debt peonage, child soldiering, and so forth. If slavery made the U.S. wealthy, as Baptist and his buddies claim, such officials reason, then aren’tantislavery efforts just another imperialist attempt to keep their nations impoverished? Perhaps slavery should even be encouraged. Maybe slavery is immoral, they reason, but the ends justify the means.”

I have previously addressed the argument that slave produced cotton as a driving force in American economic development. I would also say that it is not clear to me why the benefits to slaveholders, or non-slaveholders who benefited, are relevant to the issue of reparations. My understanding of the law (at least in countries with a common law tradition) is that compensation should be based on the damage done to the party that was harmed not on the benefit gained by the person that caused the harm. If your negligence causes an accident in which I am injured I seek compensation for the damage done to me: my medical expenses, lost wages, pain and suffering, etc. It is no defense on your part to claim that you gained only minor benefit from your negligence.

The Racist Dawn of Capitalism by Peter James Hudson reviews books by Beckert, Baptist, Johnson, and Draper. On Baptist he writes

“This “half” has, in fact, been told—multiple times and more often than not by black writers, some of whom are fleetingly mentioned in Baptist’s footnotes. But the claim that African Americans built the world is simply wrong. Baptist’s book is marked by such rhetorical excesses, which lend themselves to a blinkered and narcissistic American exceptionalism. The result is an oversimplified view of capitalism and slavery that ignores the historical contributions to modernity of Africans in the Caribbean and in Africa itself.”
Posted by B. H. at 6:18 AM No comments:

Matthew Desmond wrote an interesting piece in the New York Times, drawing on his new book on eviction, but I’m not sure that the economics implicit in his analysis and the economics implicit in his remedy are consistent.
The analysis seems to be that landlords and lenders are not just earning a profit from dealing with the poor they are earning extraordinary profits from the poor:

“Landlords like Tobin aren’t making money in trailer parks or ghettos in spite of their poverty but because of it. Depressed property values offer lower mortgage payments and tax bills. In poor areas of the cities, rents are lower, too — but not by much. In 2010, the average monthly rent in Milwaukee’s poorest neighborhoods was only $50 less than the citywide median.

Landlords renting to poor families can charge slightly reduced rents but, owing to far lower expenses, still command handsome profits. As a landlord with 114 inner-city units once told me, speaking of an affluent suburb near Milwaukee: “In Brookfield, I lost money. But if you do low-income, you get a steady monthly income.”

He also points out that

“Exploitation is not confined to the housing sector alone. It thrives when it comes to other essentials, like food. Inner-city bodegas take advantage of families’ lack of transportation to increase grocery prices, effectively reducing the value of food stamps. The payday lending industry exploits poor people’s lack of access to credit by offering high-interest loans and collecting over $7 billion a year in fees.”

I agree there is a problem. But we need to understand the causes of the problem. There are essentially two reasons for high prices (rents or interest rates): either the cost of production is high or there are barriers to competition that enable sellers to earn monopoly profits. If renters are being exploited, in the sense that landlords are getting a greater rate of return than other people who take similar risks, then we need to find out what is preventing others from entering the market. Removal of these barriers to entry should drive down prices and profits. If on the other hand, there are actually high costs associated with lending or renting in low income neighborhoods we need to think about what might be done to reduce those costs. Desmond’s analysis seems to point toward monopoly but his prescription seems to point toward high costs of production.

One other alternative is that the prices are not actually that high, but many people are still unable to afford them. If that is the case, then the issue is fundamentally one of redistribution. But then the story is not really about exploitation.
Posted by B. H. at 3:19 PM No comments: