More on the recession of the early 1920s

I saw the other day that James Grant’s The Forgotten Depression had received an award from the Manhattan Institute. The book argues that the economy recovered quickly from a “Depression” in the early 1920s because the government did not intervene, and that this provides a lesson for our times. On the same day I read a new paper in the Journal of American History, “Before the Roar: U.S. Unemployment Relief after World War I and the Long History of a Paternalist Welfare Policy,” by Daniel Amsterdam.  You would think they were written about two different countries. Amsterdam describes numerous government responses (largely at the state and local level, but in some cases promoted at the federal level) to unemployment during the recession in the early 1920s.


I have to say, I find The Forgotten Depression and its reception a bit puzzling. It seems to me that the need to identify examples of times when the economy recovered quickly without government intervention is motivated more by politics than by economic theory or historical evidence. Why should a recovery be quick? If a credit boom leads to a severe misallocation of resources, why would we expect that reallocation after the boom would occur at any particular speed? Where is there in, for example, Austrian Business Cycle Theory a method of predicting how many months a recovery will take? Why, even in the absence of government intervention, might it not take years for reallocation to occur?


I can understand making an argument that, other things equal, markets should adjust more quickly when there are fewer restrictions placed upon them. But 1920 and 2008 are so far from other things equal it is difficult to make useful comparisons. The two periods differ fundamentally in terms of the source of the boom and bust. The misallocation of resources, by peacetime standards, was driven by the war.  In addition, Grant focuses on the federal government’s response to unemployment, but before WWII spending by state and local governments (as well as regulation) exceeded that of the federal government.  Just because the federal government did not do something in the past does not mean that government did not do it. One would need to look carefully at state and local actions to understand the role of “government” during the recession of the early twenties. Amsterdam does not provide a complete picture of state and local action, but it is a good start.


And, yes, I called it a recession, not a depression. If we choose to call the early twenties a depression then almost every downturn in U.S. history should be called a depression. Grant rejects recent estimates of historical business cycles by Christina Romer. Perhaps Romer’s estimates are in error, but I do not find the lyrics of “Aint We Got Fun” to be persuasive evidence that she erred.


The graph below shows percent change in Real GDP (1890-1950) based on the Millennial Edition of Historical Statistics (Ca 9). The recession of the early 1920s was simply was not unusually long or severe compared to other downturns. 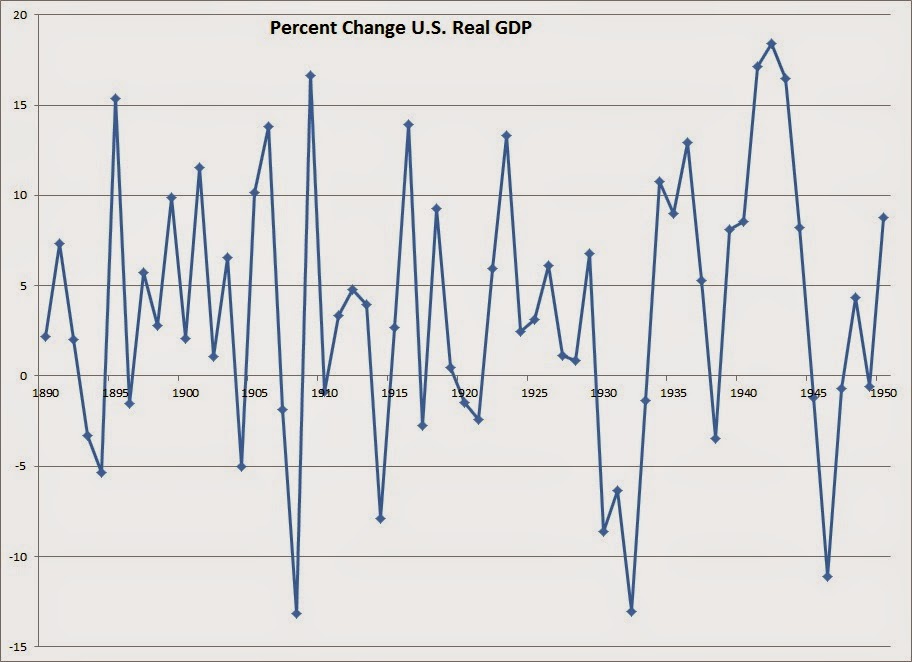