More How I Built This and Business History

This is the second post on the podcast How I Built This and academic research on business history and entrepreneurship.

Danny  Meyer founded some of the most highly regarded restaurants in New York: Eleven Madison Park, Union Square Café, and Gramercy Tavern. He is also the founder of Shake Shack, which generates over $400 million in revenue a year. When he decided that he wanted to get into the restaurant business rather than go to law school a college friend got him an interview that led to his first restaurant job. Later he was able to use his father’s connections in the travel business to work with chefs in France and Italy. Another friend, who happened to be Bryan Miller, the food writer for the New York Times, who helped him make contacts with people in the New York food scene. When he found the perfect place to open his first restaurant, Union Square Café, he was able to obtain the lease for about $240,000 and spend another $500,000 building out the restaurant thanks to loans from his mother, aunt and uncle. This aspect of Meyer’s story is not that unique. Many of the stories on How I Built This involve getting loans of tens or even hundreds of thousands of dollars from relatives.  The mother of Daymond John, the founder of FUBU, borrowed $100,000 on her house to put into his business and then let him use the house as his factory. The founders of Whole Foods, Supergoop, Chipotle, MM La Fleur, Tempurpedic, and Crate and Barrel all received large loans or investments from family members.

Help doesn’t always come from family. Holly Thaggard was able to get a chemist to help her develop the product and she was able to get a PR firm to take her on because of a phone call from Roxanne Quimby, founder of Burt’s Bees, who had befriended Thaggard at a trade show.

These stories reminded me of one of my favorite business history books, Pull: Networking and Success since Benjamin Franklin by Pamela Walker Laird. In the book Laird challenged the notion of the entrepreneur as a self-made man or woman by highlighting the role of connections in stories of business success. This is from the introduction 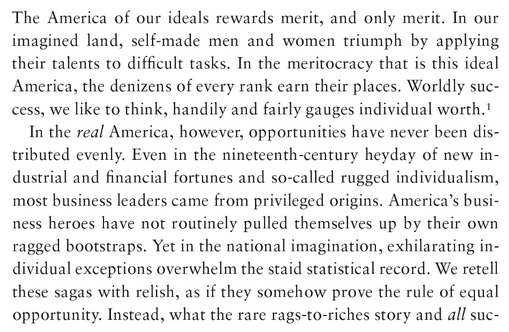 Far from being the self-made men or woman of entrepreneurial mythology, one of the common characteristics of successful business founders appears to be the ability to recognize when they need help and the willingness to go get it.

The Importance of Douglass North

I just listened to an episode Econ Roots, in which Mike Munger was interviewed about the importance of Douglass C. North. Like myself, Munger went to Washington University and worked with North. His answer to why North was important was that “he had a view of economic history that took time seriously.” He notes, for example, that North would ask about where preferences came from rather than taking them as given.

It is a great podcast episode, but my personal answer to the question would be slightly different because I had recognized the importance of explain changes in institution over time before I read North. As an undergraduate at the The Evergreen State College the two books that had the biggest impact on me were Samuelson’s Economics and Thorstein Veblen’s Theory of the Leisure Class.

The neo-classical economics of Samuelson immediately made sense to me. I found the use of models to analyze individuals maximizing subject to constraints and interacting with other people doing the same to be an incredibly powerful tool.

Then I read Veblen. Veblen argued that economic theory was fine as far as it went, but it didn’t go far enough. In his first book, The Theory of The Leisure Class (1899), he explained that, "The institutions are, in substance, prevalent habits of thought with respect to particular relations and to particular functions of the individual and of the community: and the scheme of life, which is made up of the aggregate of institutions in force at a given point in the development of any society, may on the psychological side be broadly characterized as a prevalent spiritual attitude, or theory of life." (Veblen 1912, 190) Thus, “the evolution of society is substantially a process of mental adaption on the part of individuals under the stress of circumstances which will no longer tolerate habits of thought formed under and conforming to circumstances in the past." (Veblen 1912, 192) To Veblen this process of cultural change should be the central concern of economists: He argued that both the preferences and constraints that economic theory takes as given change over time and answering the biggest questions in economics requires understanding how they change over time.

So, I was persuaded of both the utility of economic theory and the need to explain how the things that influences those choices, including preferences, change over time.

I know that Doug read Veblen when he was younger, but I don’t think he was influenced by him, at least consciously. I don’t know if he ever read Samuelson. Yet what North provided me was a link between institutional change and economic theory. And the link ran in both directions. He provided an approach that made it possible to talk about the impact of institutions on market performance and to use economic theory to try to understand how institutions changed. The idea of transaction costs provided a means to connect different institutional arrangements to the performance of markets. Transactions costs create a wedge between buyers and sellers. The more resources you must use trying to enforce agreements or protect your property the less mutually beneficial trades will exist. Effective institutions can lower the cost of transactions, encouraging trade, investment, and innovation.  Economic models can also be used to try to explain differences in institutions and how they change over time. The first thing I read by North was a “Framework for Analyzing the State in Economic History,” followed immediately by Structure and Change. In both he used a simple model of a wealth maximizing ruler to explain institutions that do not maximize economic output. He asked why wealth maximizing ruler might not create rules that maximized output for the country, creating the largest possible pool of wealth to extract revenue from. The answer in this model was that the ruler faced a transaction cost constraint and a competition constraint. The wealth maximizing institutions might entail higher costs of collecting taxes than institutions that lead to lower levels of output. For instance, selling a monopoly might be an easy way to raise revenue but not one that is likely to maximize output. This is the transaction cost constraint. The competition constraint arises from the fact that wealth maximizing institutions might be ones that enhance the power of potential competitors to the ruler. For instance, international trade might increase output but also increase the wealth and power of people who present a potential threat to the ruler.

For me, Doug’s work meant that I didn’t have to choose between Samuelson and Veblen.

How I Built This, Entrepreneurs, and Luck

Guy Raz has been doing the How I Built This podcast for a while, but I only recently started listening to it. On each episode he talks with someone who built a company: Lululemon, Eileen Fisher, Jet Blue, Sierra Nevada, Uncle Nearest Whiskey, Five Guys, etc. One of the things I like about the show is that at the end of the show he always asks them how much of their success was due to their hard work and how much to luck. Most of them attribute a lot of their success to luck.

Chip Wilson the founder of Lululemon noted that at one point failure was only averted because another company he was working for was bought out and he received a severance package that enabled them to make payroll. He also gave an interesting answer at the end when asked about the role of luck. His answer was essentially that he was lucky that the world was ready for what he was passionate about: athletic wear that was both functional and attractive. His first venture in clothing design was comfortable shorts for himself. The story makes clear that he gave some thought and did a little research before directing that passion toward yoga, but in the end, he makes it sound like he would have continued working on athletic wear even if his success had been less spectacular.

It reminds me of one of my favorite papers on entrepreneurship: John Vincent Nye. "Lucky fools and cautious businessmen: on entrepreneurship and the measurement of entrepreneurial failure." Research in Economic History 6 (1991): 131-152. John was one of my professors at Washington University and this paper was published in a special issue of Research in Economic History in honor of Jonathan Hughes, author of the Vital Few: The Entrepreneur and American Economic Progress and one of John’s professors at Northwestern. John argues that we should view of entrepreneurs not as especially insightful or risk taking but as overly optimistic people who occasionally get lucky and hit on something really profitable: 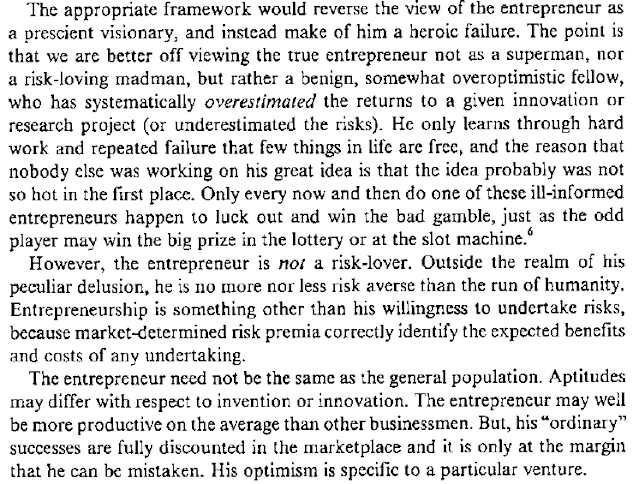 After years of writing about business history and financial failure this is still the way it looks to me. A lot of people think they have great ideas that make them underestimate the risk of their venture. Most often they are wrong, but every occasionally someone is right. People then have tendency to attribute their success to something special about the person, despite the fact that many of them failed repeatedly. Ford is probably the classic example both because of the bankruptcy of his first company and because of some of his spectacularly bad choices after the Model T.