We received our copies of Bankrupt in America: A History of Debtors, Their Creditors, and the Law in the Twentieth Century 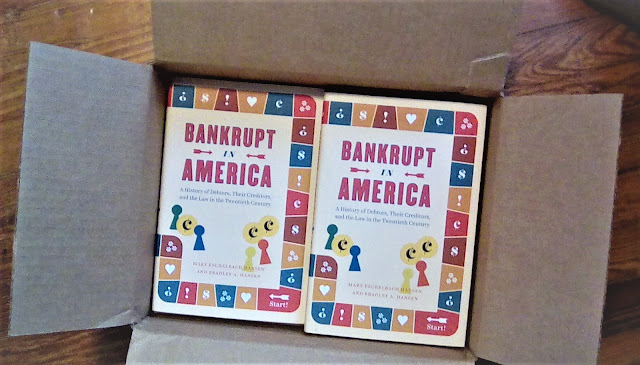 I previously posted an overview of the book but here is a description of each of the chapters.

The introduction acquaints the reader with what is already known about bankruptcy in the twentieth century, describes the methods used in the book, and previews the central argument. The chapter begins with a broad overview of the laws and procedures governing the collection of unpaid debt at the state and describes federal bankruptcy. The text highlights the interplay between state and federal law. It introduces the interdisciplinary literature on bankruptcy, emphasizing the need for an analytic framework that integrates the story of changes in the bankruptcy law with the story of changes in the bankruptcy rate. It places the framework and methods within the contexts of New Institutional and cliometric traditions.

Chapter 2 examines the origins and consequences of the 1898 Bankruptcy Act. The authors of the law were business owners who wanted an efficient procedure to deal with the failure of other businesses. They gave little thought to personal bankruptcy, and the law that they designed for businesses erected no substantial obstacle to the discharge of consumer debt. As access to consumer credit expanded, personal bankruptcy grew both relative to business bankruptcy and in absolute terms. However, personal bankruptcy did not grow evenly across the U.S. Households sought the protection of bankruptcy law mainly in states where garnishment of wages was easy. The growth in personal bankruptcy led to a shift in beliefs about the causes of bankruptcy and the purpose of bankruptcy law. Initially, creditors, debtors, legislators, judges and other legal professionals agreed that the purpose was to satisfy the claims of creditors efficiently. By the end of the 1920s, many interested parties stressed the importance of providing relief to debtors, who were portrayed as victims of unscrupulous creditors such as loan sharks. The increase in bankruptcy also led to changes in organized interest groups. Legal professionals began to work alongside creditors to try to shape the law.

Chapter 3 An Emphasis on Workout rather than Liquidation

As bankruptcy rates increased in the 1920s, creditors and legal professionals sought to increase in the efficiency of administration. However, as the nation slipped into the Great Depression, reformers found that neither the country nor Congress was interested in their ideas for improving efficiency. Business bankruptcy increased rapidly at the start of the Depression, and President Hoover pushed Congress to add ways for businesses and farmers to develop repayment plans and avoid liquidation. As the Depression wore on, however, business bankruptcy became less of a problem because new business formation was low. Personal bankruptcy cases continued to increase in states with pro-creditor collection law. Representatives from those states, especially Walter Chandler from Tennessee, argued that workers wanted to pay their creditors if they, too, could have a procedure that granted them more time. Congressional debates around the proposals that eventually became Chapter XIII (now known as Chapter 13) pitted those who viewed the procedure as a means to enable people to pay their debts and avoid the stigma of bankruptcy against those who balked at the idea of making the courts a collection agency for creditors. This theme was reprised several times over the next 70 years.

The bankruptcy rate was very low during World War II, but it increased quickly after the war ended. As growth in consumer credit returned to its pre-Depression trend, so did growth in the personal bankruptcy rate. Bankruptcy grew everywhere, but it rocketed past its previous peak in states with pro-creditor garnishment. Although personal bankruptcy increased, few cases were filed under Chapter XIII. Demand by debtors for Chapter XIII probably was not as great as its Depression-era advocates imagined it to be. People rarely used the procedure for spreading payments over time except in places where bankruptcy referees pushed it.

Pro-creditor garnishment law was a key driver of the bankruptcy rate for the first two-thirds of the twentieth century, but it did not survive the consumer rights movement of the 1960s. By 1970, Congress and the Supreme Court limited the ability of states to maintain and enforce pro-creditor collection laws. Chapter 5 shows that the federal restrictions on garnishment law, especially the Consumer Credit Protection Act, reduced the state-to-state variation in the bankruptcy rate and caused the national bankruptcy rate to level off. Although the growth of bankruptcy in the 1950s and 1960s led to calls for reform of federal bankruptcy law, the effort moved slowly. By the time recommendations for bankruptcy reform were made to Congress, bankruptcy rates were no longer regarded as a problem. Almost all of the changes to personal bankruptcy in the 1978 Bankruptcy Reform Act encouraged debtors to file.

Chapter 6 The Triumph of the Consumer Creditor

Bankruptcy rates rose after 1978. The debtor-friendliness of the 1978 changes set the stage for a new bankruptcy crisis, but the increasing importance of banks that issue credit cards was the most important force. The Supreme Court’s 1978 decision in Marquette National Bank of Minneapolis v. First Omaha Services Corp. led directly to the growth in the market for credit cards. Banks could now profit from offering cards to high-risk consumers, and this put more people on the path to bankruptcy. Card issuers used some of their profits to lobby for changes to bankruptcy law. Studies by creditor-funded organizations, such as the Credit Research Center, supported a narrative in which lax bankruptcy law and lack of stigma led households to file for bankruptcy even when they could pay, imposing a so-called bankruptcy tax on honest debtors. In 2005, Congress passed a bankruptcy reform bill supported by banks and credit card companies, over the objections of many legal professional, scholars, and even some creditors. Today personal bankrupts must use Chapter 13 repayment plans unless they can show that they do not have sufficient income to repay. Credit card issuers won the argument that retailers began in the 1930s.

The conclusion reviews four themes in the evolution of bankruptcy and bankruptcy law. First, long run growth in personal bankruptcy comes from growth in the supply of credit at the extensive margin. Businesses regularly invented new ways to grow through consumer lending, and the relaxation of usury restrictions facilitated riskier loans. Second, state laws governing the collection of debt are key to interpreting geographic and temporal patterns in bankruptcy. The interaction of state collection law and bankruptcy law caused bankruptcy rates to be higher in states with pro-creditor collections. Pro-creditor collection law also magnified the effect of the growth in the credit supply and the effect of recessions on the bankruptcy rate in those states. Third, people matter. A small number of individuals had outsized influence on the history of bankruptcy. Fourth, stories matter. Beliefs about bankruptcy are typically expressed in stories about what brings people to bankruptcy. In some stories, debtors are driven to bankruptcy by unscrupulous creditors or economic crises. In other stories, unscrupulous debtors take advantage of overly generous laws, imposing the cost of their default on others. The direction bankruptcy reform took depended upon which story carried the day.
Posted by B. H. at 7:57 AM No comments:

Trumpanomics: The Art of the Con

Trump claimed that "In just three short years, we have shattered the mentality of American decline," by reversing the disastrous policies of the previous administration. Anyone who has been paying attention knows that this is probably not true, since he said it. I don't have time to address all of his lies (see this article in the Washington Post), but its not hard to show that there hasn't been any sharp break in terms of the economy

GDP is increasing, but again it has been since the last recession ended. Do you see any noticeable change in trend since he came to office?

There are some places where there appear to be some changes in trends. For instance, job openings have begun to decline.

And the size of investment relative to GDP has started to decrease ..

Bankrupt in America: A History of Debtors, Their Creditors and the Law in the Twentieth Century by Mary Eschelbach Hansen and Bradley A. Hansen is available from Amazon and The University of Chicago Press. It is part of the Markets and Governments in Economic History series edited by Price Fishback. 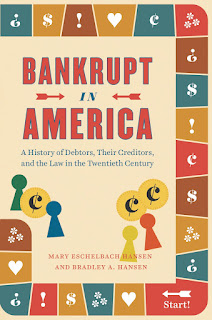 I'm going to do few posts about the book, starting today with an overview of the book.

Though the U.S. Constitution granted it the power to create a bankruptcy law, Congress did not pass the first permanent bankruptcy law until 1898. Bankruptcies rose from about one per 10,000 people annually in the first decades of the twentieth century to about one per 300 people at the turn of the twenty-first century. Bankrupt in America explains the how bankruptcy evolved from an option that Congress seldom used, to an indispensable tool for businesses, to a central element of the social safety net for households, all in the span of a century. The analytical narrative unites the history of how Americans have used bankruptcy with the history of the bankruptcy law itself. The central argument is that bankruptcy law and bankruptcy rates interact over time. Bankruptcy is the last in a series of choices by debtors and creditors about borrowing, lending, repaying, and collecting debt. Changes in federal bankruptcy law, in state and federal law governing debtor-creditor relations, in local legal culture, and in the supply of credit influence the choices and lead to changes in how the bankruptcy law is used.  Changes in how the bankruptcy law is used give rise to changes in beliefs and in interest groups, which in turn result in changes in the law. The interactions create an ongoing historical process of institutional change. The book traces the interactions over the twentieth century using a rich combination of statistics and documents, including recently digitized bankruptcy statistics and stories constructed from court case files.
Posted by B. H. at 6:57 AM No comments: