I am putting up this link to a blogpost from last year because of an article in the Washington Post about Ed Baptist's project to digitize runaway slave ads. The article quotes Baptist and, not surprisingly, does not mention that several people have already done what he claims to be doing.

Fugitive Slave Ads and the Runaway New History of Capitalism
Posted by B. H. at 9:10 AM No comments:

Credit Relationships and Business Bankruptcy during the Great Depression

here is an interesting new paper by my favorite economic historian, Mary Eschelbach Hansen, and her co-author Nicholas Ziebarth.

“Credit relationships are sticky. Stickiness makes relationships beneficial to borrowers in times of their own distress but makes them potentially problematic when lenders themselves face hardship. To examine the role of credit relationships during a financial crisis, we exploit a natural experiment in Mississippi during the Great Depression that generated plausibly exogenous differences in financial distress for banks. Using new data drawn from the publications of the credit rating agency Dun & Bradstreet and from original bankruptcy filings, we show that financial distress increased business exit but did not increase the bankruptcy rate. Financial distress caused both banks and trade creditors to recalibrate their collections strategies, which is revealed by changes in the geographical distribution of the creditors of bankrupt businesses.”
Posted by B. H. at 8:51 AM No comments:

The Two Disciples at the Tomb (Henry Ossawa Tanner) 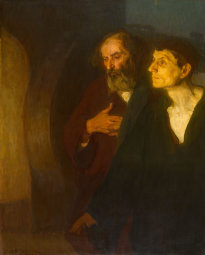 1. The U.S. leads the world in health care spending per person, but not in health care outcomes. Many people look at that and say that health care costs too much in the U.S., and we should be able to get the same our better outcomes by sending less. Maybe that is correct, maybe not. That is not the point here. But–
2. the U.S. leads the world in K-12 education spending per student, but not in student outcomes. Yet nobody, says that education costs too much and that we should spend less. Except–
3. me. I believe that we spend way too much on K-12 education.
4. We spend as much as we do on education in part because it is a sacred cow. We want to show that we care about children. (Yes, “showing that you care” is also Robin Hanson’s explanation for health care spending.)
5. We also spend as much as we do because of teachers’ unions. They engage in featherbedding, adding all sorts of non-teaching staff to school payrolls (and adding more union members in the process). In Montgomery`County, last time I looked, there was one person on the payroll for every 6 students, but there were more than 25 students per classroom teacher. That is why I do not think that cost disease, as discussed recently by Scott Alexander, is the full story. It’s not just that it’s hard to raise productivity in teaching. It’s that teachers’ unions cut down on productivity by continually getting schools to add non-teaching staff.
6. If I could have my way, the government would get out of the schooling business.
7. If we wish to subsidize education, we should do it through vouchers. Note that this could be done on a progressive basis, with the size of the voucher a declining function of parent’s income.
8. I do not expect educational outcomes to be any better under a voucher system. That is because I believe in the Null Hypothesis, which is that educational interventions do not make a difference.
9. However, a competitive market in education would drive down costs, so that the U.S. would get the same outcomes with much less spending.
A few additional notes:
10. When parents seek out schools with good reputations, they are going after schools where most of the students come from affluent families. The schools themselves do not do much.
11. Even within income-diverse school districts, affluent parents figure out a way to keep their kids from being surrounded by poor children.
12. I have grown increasingly uncomfortable with the leftist ideology preached in government schools.

At the risk of offending Art, and probably some other people, I do not agree with most of what Kling believes. Actually, there isn’t much in it I can find to agree with. Kling’s statement isn’t an argument. It is a creed, with statements like “I believe we spend way too much on K-12 education.”

Even the premise isn’t consistent with the available evidence. These numbers from the OECD show that U.S. does not lead in spending on K-12. As a percentage of public spending the U.S. is right around the OECD average. The results of that spending are more difficult to compare. The usual rankings based on test score comparisons are really not very informative, because many of the differences in scores do not reflect statistically significant differences. The Brown Center Report shows that relatively few countries have scores that are significantly higher those of the U.S. In other words, the United States spending is near the upper end but not at the very top, and the results are at the upper end but not at the top. The story that American public education is outrageously expensive and appallingly ineffective is simply not supported by the evidence.

Moreover, you would only expect spending the most money to get you the best education, or best health care, if you think that spending is the only determinant of educational or health performance. I don’t know anyone who believes this. In addition, evidence of relative cost and performance is only evidence against public education generally if the countries that perform better are ones that do not rely on public education. I don’t know of any evidence to that effect.

There is, on the other hand, more than a little evidence that education matters for both individual earnings and economic growth.Measured outputs of education are associated with economic growth. To the extent that inputs do not improve outcomes they are not associated with economic growth. People with more knowledge about how to produce things produce more things, if producing things is rewarded.
Easterlin, Richard A. "Why isn't the whole world developed?." The Journal of Economic History 41, no. 01 (1981): 1-17.
Barro on Education and Growth
David Mitch Education and Growth a EH.Net Encyclopedia
David Hanushek on increases in skill and economic growth
Race based differences in educational quality have also contributed to differences in earnings between blacks and whites in the United States. See
Carruthers, Celeste K., and Marianne H. Wanamaker. "Closing the gap? The effect of private philanthropy on the provision of African-American schooling in the US South." Journal of Public Economics 101 (2013): 53-67.
And
Carruthers, Celeste K., and Marianne H. Wanamaker. "Separate and unequal in the labor market: human capital and the Jim Crow wage gap." Journal of Labor Economics 35, no. 3 (2017).

Or you can watch Marianne Wanamaker present the research here

Education matters and public education has, at the very least, been consistent with long run economic growth. If recent elections are any indication, public schools do, however, appear to be failing at preaching leftist ideology.

Kling’s creed about getting government out of education is an example of libertarian Nirvana fallacy. The Nirvana fallacy is generally used in economics to refer to a situation in which people compare an imperfect market with a perfect (Nirvana) government solution that has never actually existed. It, however, makes no more sense to compare an imperfect government action to an idealized market outcome that has never actually existed.

“Let us, then, examine in a little more detail what a free-market defense system might look like. It is, we must realize, impossible to blueprint the exact institutional conditions of any market in advance, just as it would have been impossible 50 years ago to predict the exact structure of the television industry today. However, we can postulate some of the workings of a freely competitive, marketable system of police and judicial services. Most likely, such services would be sold on an advance subscription basis, with premiums paid regularly and services to be supplied on call. Many competitors would undoubtedly arise, each attempting, by earning a reputation for efficiency and probity, to win a consumer market for its services. Of course, it is possible that in some areas a single agency would outcompete all others, but this does not seem likely when we realize that there is no territorial monopoly and that efficient firms would be able to open branches in other geographical areas. It seems likely, also, that supplies of police and judicial service would be provided by insurance companies, because it would be to their direct advantage to reduce the amount of crime as much as possible.”

This isn’t economics; it is speculative fiction. This is what you are able to do when you free yourself from the onerous constraint of evidence. You can state with certainty that we can get rid of government support for education, law enforcement, or even national defense, which have been associated with long periods of rapid economic growth, becauseyou just know that a better private solution will emerge. By the way, Rothbard does suggest that people underestimate the private provision of law in history but see Edwards and Ogilvie and Ogivlie and Carus argument that people actually underestimate the role of the state in the examples that Rothbard provides.

Elis, Haber and Horrillo attempt to explain why different patterns of political and economic development since about 1750 appear to be geographically clustered Climate, Geography, and Political and Economic Development
Posted by B. H. at 11:44 AM No comments: