Coase on Lighthouses and Economics

Earlier this week Daniel Shestakov noted the publication of a new paper on lighthouses by Erik Lindberg. He and I then had a brief exchange on twitter about whether or not the work since Coase’s (1974) paper had supported or contradicted his contentions. It got me thinking that maybe I had missed something in the more recent work. I went back and looked at some of the papers. I’m still not entirely certain what Shestakov’s position is, but it seemed to me that he was claiming that recent work had supported the theorists rather than Coase. I still don’t see it that way.  Theory suggests that if a good is non-rival and non-excludable that there will be a free rider problem and that the outcome will be inefficient in the sense that it will not maximize the sum of consumer and producer surplus. Coase did not set out to refute the theory. He simply argued that it did not necessarily apply in the case of a commonly used example: the lighthouse. The extent to which a good is non -rival and non-excludable is an empirical question. Coase argued that in some cases lighthouses were not in fact non-excludable. In some cases it is not prohibitively costly to charge the users for the service. It seems to me that recent work has not refuted this claim.

My interpretation of Coase’s paper is that it was really much more about economic methods than it was about lighthouses or public goods. The paper was about the way that economists like Samuelson didn’t bother to study the history of lighthouses before using them as an example of a public good. The primary claim of the paper was that the theory of public goods did not necessarily apply to lighthouses because in some cases it was possible to make the people who used the lighthouse pay for the service provided. Specifically, it was possible to identify which lighthouses a ship had benefited from and charge them accordingly at the time they docked. Coase described the finance and operation of private lighthouses as follows: 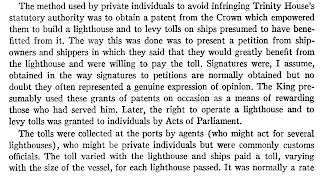 It was, for instance, much like a private toll bridge. Coase may actually overstate the extent to which the government set price distinguished the case of lighthouses from most goods. He was clearly aware of the extensive role of government in the provision of lighthouses, and he made no effort to hide this from his readers. Coase, however, characterized the government’s involvement as being not substantially different than the provision of other goods by private companies:

Responses to Coase’s paper seem to fall into two categories.
1.
Government was extensively involved in the so called private lighthouses. Therefore, the lighthouses were not as private as Coase suggested. It has even suggested that it is ironic that Coase chided other economists for not getting their facts straight and then failed to do so himself.

2.       Coase’s speculation about the relative efficiency of private provision is unsupported by the evidence.

Van Zandt (1993) falls into the first category. Van Zandt, however, does not seem to disagree with Coase’s description of the finance and operation of lighthouses. Instead, he disagrees with the interpretation. His primary argument is that the “public” versus “private” dichotomy is not very useful. Coase seems to have agreed with Van Zandt in so far as Van Zandt notes that Coase suggested that there may be an even wider variety of institutional arrangements than he considers.

Bertrand (2006) agrees with Van Zandt that there was extensive involvement of the government in the so-called private lighthouses. She claims at one point that “We have thus shown that Coase, in his account of the English lighthouse system, underestimates the importance of government, and conversely overestimates the appropriateness of individual initiative (Bertrand 400).” But like Van Zandt she has not actually shown that the lighthouses were financed and operated differently than Coase described. People obtained charters from the government, which set the fees and was sometimes directly involved in the collection of these fees. But Coase said all of that. He never suggested that the government was not at involved. He never even suggested that it was not extensively involved.

Finally, Lindberg (2015) adds a comparative perspective as well as details about the amount of fees collected. Perhaps, most importantly, I think he moves in the direction originally suggested by Coase. He analyzes the actual lighthouse systems that existed in different places and times to try to understand what might explain the differences in institutional arrangements.
Posted by B. H. at 11:00 AM