Even More on Capitalism and Slavery

The Junto Blog post regarding slavery and capitalism prompted a discussion in the comment section, which Edward Baptist joined in on. He argued that he had not misrepresented the work of Olmstead and Rhode but then doubled down and presented an even more misleading version of their work.
Baptist writes that

“I argue that they adopt a new system around 1800, more or less, as evidenced by the narratives of survivors, which is supported by the very existence of systematic cotton-picking data itself. (It’s unclear, in Olmstead and Rohde’s argument) why their data even exists.)

In their paper in the Journal of Economic History, Olmstead and Rhode state that planters kept record books of the pickings of individual slaves and that

“Failing to meet picking standards had severe consequences. In 1834 S. A. Townes of Marion, Alabama threatened to "make those bitches go at least 100 [pounds] or whip them like the devil.” In the 1830s Dr. J. W. Monett of Mississippi asserted that after weighing an individual's daily picking, masters would whip slaves for light or trashy picking. On several occasions, Louisiana planter Bennet Barrow ordered a whipping for all hands because the output was too low. As yet another example, John Edwin Fripp of South Carolina recorded "popping" and "switching" his slaves for light picking. On the Mississippi plantation of John Quitman and Henry Turner, a number of slaves ran away rather than face punishment for light or trashy picking.”

In other words, they argued, based on the evidence, that the slaveholders used the combination of detailed record keeping and whipping to maximize the productivity of slaves. In addition, they found that the average pounds of cotton picked by a slave increased over time.

There are essentially two ways that this increase over time could have occurred. First, slaves could have been forced to pick closer to the maximum that they were physically capable of. Second, the maximum that they were physically capable of picking increased over time. O & R argue for the second explanation. Improved plants enabled slaves to pick more cotton in a given amount of time. In other words, slaveholders used physical coercion to force slaves to pick at maximum picking rates and through plant breeding they were able to increase this maximum amount that a person was physically capable of picking overtime.

Baptist’s alternative seems to be that the maximum remained relatively stable (he acknowledges that improved plants may have played some role), but planters became more effective at forcing people to produce up to the maximum. But this explanation poses several problems.

1.
Why were early slaveholders so bad at pushing people to their capacity? Keep in mind that all the records on picking are from slaveholders who kept picking books, yet picking rates in the 1820s appear to have been well less than half of those in the ‘40s and ‘50s.
2.
Why didn’t these techniques carry over to other crops (sea island cotton and sugar)
The two problems are illustrated with the following figures from  O & R. 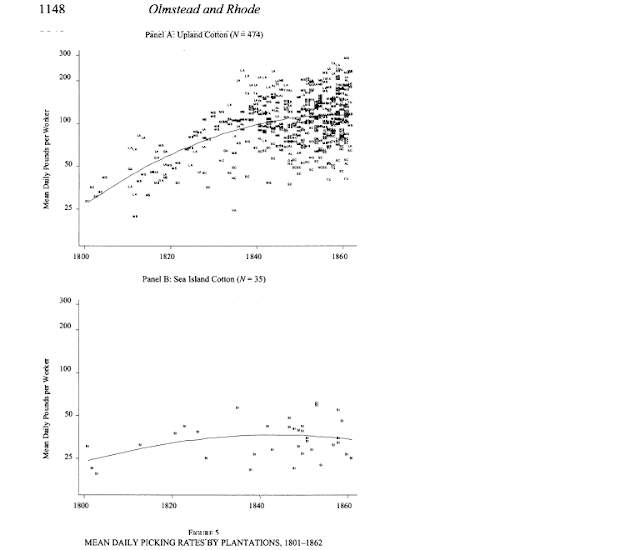