The Economist article I wrote about the other day cites work by Anthony Randazzo and Jonathan Haidt. The paper “Are Economists Influenced by Their Moral Worldviews? Evidence from the Moral Foundations of Economists Questionnaire” they conclude that moral judgments influence economist’s judgments and that “the long recognized line between positive and normative analysis is much blurrier than widely understood.”

Here are the questions they asked of 131 economists. The responses are grouped by economist’s self-definitions: Keynesian, Neo-Classical, New Institutionalist, and Austrian. 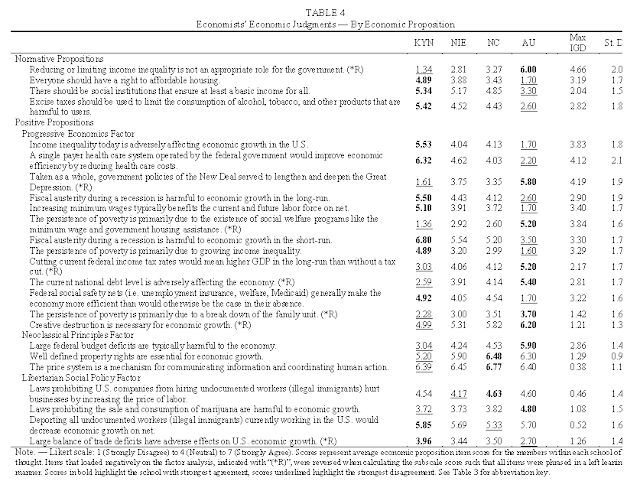 The scale goes from 1 (strongly disagree) to 7 (strongly agree), with 4 corresponding to neutral. Randazzo and Haidt emphasize that there were able to show a correlation between moral views and empirical judgments, but what strikes me is that most of the scores for Neo classical and New Institutionalist (who together account for about 58% of those surveyed) on the empirical statements seem to fall between 3 and 5. In other words, they were not sure. I regard that as the correct response to most of the questions.

I am pretty confident that differences in bankruptcy rates between states are largely explained by differences in collection laws. I have studied this a lot. I do not know whether current levels of inequality are harming economic growth. I have not researched the topic. In addition, I think it is a difficult question to answer.

I think that economics provides a very useful approach to answering important questions. But you have to use economic theory to guide the hard work of empirical research. You can’t just kick back in your armchair and conjure up the answers. Unless you are very familiar with the empirical research on a question (preferably having done some of it yourself) you should be very cautious about your answer. Even if you are very familiar with the empirical research, you should still be cautious when considering complicated problems.
Posted by B. H. at 9:05 AM