In the long run, most wealth is produced, not plundered. Slavery created bad institutions that inhibited industrialization.
Yesterday I wrote about the response on Twitter to this statement by Noah Smith and said that today I would write about my thoughts on this statement.

In general, I tend to agree with Smith, largely because plunder is not a sufficient condition for economic growth and innovation and investment are. Plunder has existed throughout human history, and for most of human history it did not lead to sustained economic growth. Spain and Portugal did plenty of plundering, and it did not lead to economic growth. Switzerland became rich without much plundering. That said, the economic history of the United States had plenty of both plunder and productivity improvement.

Economists generally define economic growth as increases in real GDP per capita. That simply means that on average people produce more goods and services than they did the year before. There are basically two ways to increase output per person. First, you can give people more resources to work with: more natural resources and more capital. Second, you can figure out ways to get more output from the resources you have: you can create a cotton gin, or a spinning jenny, or ways to refine crude oil into kerosene. Both were at play in American economic growth.

Both the South and the North increased the amount of natural resources through movement to the West. This is probably the most obvious role for plunder in American economic growth: appropriation of land from Native Americans. But growth was not solely attributable to increases in land. Capital increased as well. Capital is anything that has been produced in order to increase production in the future. People most often associate capital with machines and equipment, but roads, ports, and canals are important examples of capital as well. There was a lot of new capital in the North, both public and private. Investment in canals and railroads was more extensive in the North than in the South. There were also more buildings, more mills, more agricultural equipment, etc. But neither the increases in land or capital would have really transformed economic life. Simply increasing the amount of land, the number of sawmills, and the number of spinning wheels and looms would not have led to modern economic growth. The fundamental source of growth was improvement in productivity, coming up with new and better ways to do things. These changes in technology were not just in cotton textiles and railroads and the other things people associate with industrialization. The North was still an agricultural economy and much of the growth came from improvements in crops, livestock and farm machinery, see Olmstead and Rohde’s Creating Abundance and David McClelland’s Sowing Modernity: America’s First Agricultural Revolution .These changes in technology are what made 1900 different than 1800 and 2000 different than 1900. Can they be attributed to the cotton economy of the South?

Cotton accounted for about 4 % of U.S. GDP. That is a lot for one sector of the economy. After all, Fogel estimated that GDP would have only been about 4 % lower in 1890 if you had wiped out all the railroads. The point is that even during the antebellum period the US economy was highly diversified. No one thing could drive growth. Four percent is big, but it does not make slave produced cotton the driving force behind economic growth.

But Baptist’s argument is essentially that cotton provided the stimulus for growth in the North. As I have pointed out previously his attempt at calculating the spillover effects of cotton are nonsense. The biggest problem with them is that he just makes up the numbers, but even if he had produced the numbers through research it doesn’t make any sense to compare them to GDP.

Putting aside Baptist’s nonsense calculation, his argument is actually pretty old and has not stood the test of time. It is essentially the argument that Doug North made in   The Economic Growth of the United States, 1790-1860. It seemed like a reasonable story given the evidence that Doug had collected, but subsequent research generated evidence that contradicted the theory. First, work by a number of economic historians (Gallman, Hutchison and Williamson, and Herbst) found that Doug’s theory tended to underestimate the degree of regional self-sufficiency and overestimate the importance of interregional trade. The evidence did not support the conclusion that cotton was the driving force behind economic growth. Second, much of the work done on early industrialization has emphasized the role of intraregional trade. Much of early industrialization appears to have been directed at local demand not demand from the South or Europe. Notable contributions on this subject were made by  Diane Lindstrom Economic Development in the Philadelphia Region  and more recently by David Meyer Roots of American Industrialization or see his essay on Industrialization in EH.Net’s Encyclopedia.

Finally, there are reasonable arguments supported by evidence that slavery had a negative effect on long run trends in per capita GDP. The more a region depended on slave labor in the past the lower its per capita income now. 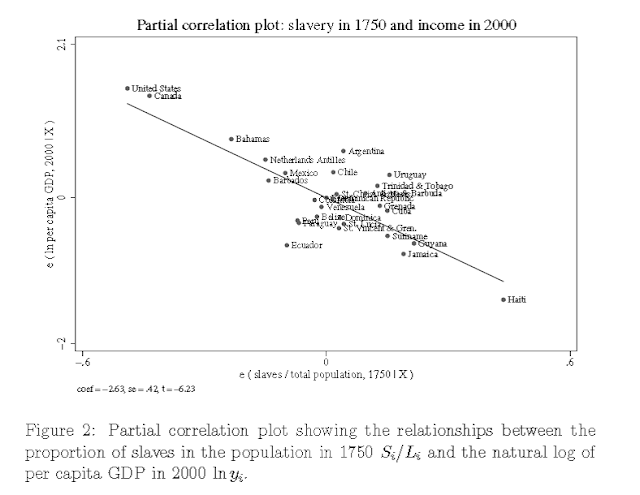 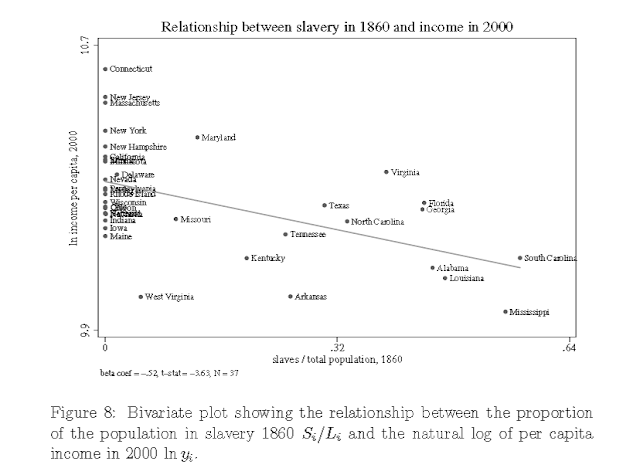 By the way, all of the studies I have mentioned are actual empirical studies. Their authors did the hard work of collecting and analyzing evidence, rather than setting in an office in, for example, Ithaca making up numbers.

Finally, I will note that enslaved people may have made contributions to economic growth that aren’t included in Baptist’s story. The McCormick reaper is one of the most famous innovations in American economic history. McCormick was from Virginia, and, according to at least some accounts, an enslaved blacksmith, Jo Anderson, was instrumental in helping him develop a working reaper.  I think this example actually supports Smith’s view about the negative effects of slavery. The vast majority of enslaved people did not even have this sort of limited opportunity to contribute to the sort of technological innovations that produce economic growth. How much more rapid might economic growth have been if African Americans had the same opportunities as Americans of European descent to exploit their ingenuity? How much more rapid might economic growth be now if African Americans had the same opportunities as others?
Posted by B. H. at 11:15 AM