Why we don't worry about cholera (in the U.S.)

Nice piece by Michael Keenan Gutierrez about eradicating cholera in New York, largely through public investment in sewers. I think he may have overemphasized the ability of the wealthy to avoid exposure. Oliver Hicks the president of the Farmers’ Loan and Trust Company, for instance, died during the 1832 outbreak. The cynic in me suspects that the deaths of the wealthy may have played a disproportionate role in promoting public investment. Bob Higgs also emphasized the importance of public investment in sewers and water filtration as a source of decreasing mortality in the U.S. in his Transformation of the American Economy, 1865-1914, which is not only mandatory reading for anyone interested in economic history, but free. I’m generally not a huge fan of the Mises Institute, but I thank them for making this book available to so many people. Here are a couple of tables from the book illustrating the impact of public investment in sewers and water filtration. 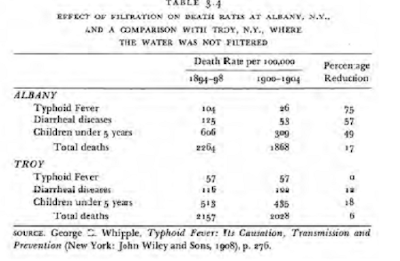 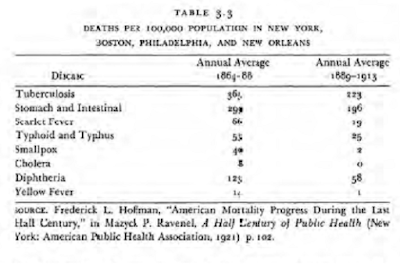