Other Things and Stranger Things

The top of this page says that “This is a blog about economics, history, law and other things that interest me.” Anyone who has read the blog knows that I don’t usually write about “other things that interest me.” This blog post is an exception to the rule. The other thing is Stranger Things. I am certainly not the first person to suggest that it is not only one of the best television shows this year, but one of the best ever. Several years ago Salman Rushdie made an argument for the virtues of television as a medium for creative expression. I think Stranger Things supports his argument.

Part of the appeal for me is that I tend to enjoy series that are structured like Stranger Things: there is a story in each episode but each story is part of a bigger mystery. It is essentially the format of the old serials they used to show at movies, or serialized stories even before that. Twin Peaks did it well. Lost probably did it best. Yes, I even liked the finale. Orphan Black may turn out to be the best. We’ll find out next year.

The trouble with these types of series, however, is that they often fall apart the closer they get to the bigger mystery.  Under the Dome, for instance, was fun the first season, but when the closer they got to the bigger mystery the more it turned to crap. Nevertheless, I am hoping for a second season of Stranger Things. I would like to see more of the characters and see more of the bigger mystery resolved. What is the upside down? What is the monster? What is it doing with its victims and those slug things? One option would be for it all to be creations of Eleven’s mind. I don’t mean that it is all in her head like St. Elsewhere. I mean that her mind makes these things real, like characters in Joe Hill’s NOS4A2 or Steven King’s Lisey's Story. I actually hope they don’t take that route. It has been done and it would make Eleven too similar to Vic McQueen (using their powers takes a physical toll on both of them). I think I would prefer if the boys were right about it actually being another dimension. I am hopeful that the Duffer Brothers will not screw it up because they did such a great job with the first season and they appear to have given more than a little thought to the bigger mystery. There is supposedly a 30 page document about the Upside Down. If I were them I would make sure it is not on any device that can be hacked.

The mystery I am most curious about is, What is going on with Hopper? I don’t mean the leftovers and Eggos. Eleven is alive. My guess is that she is hiding in the Upside Down because she knows that Mike is in danger when she is with him. After all, Brenner basically told her they would hurt the boys if she didn’t come with him. I have a hard time believing that he actually betrayed Eleven. It was completely inconsistent with everything we have seen about him. Moreover, asking Brenner for his word when he had to believe that Brenner’s word was worthless also suggests there was something more going on. Something must have happened between Hopper and Eleven that we did not see.
Of course all of the great writing would not amount to much if not for the great acting. The show is set in 1983, and Mathew Modine and Winona Ryder remind us why they became stars back in the ‘80s. That said, Finn Wolfhard, Noah Schnapp, Gaten Matarazzo, Caleb McLaughlin and Millie Brown are what really make the show standout. I think Millie Brown’s performance was particularly important to the success of the show. I told my daughter that it reminded me of Kristen Stewart in Panic Room. I believe Stewart was around the same age Millie Brown is now when Panic Room was filmed. When I first saw Panic Room I was amazed that someone so young could express so much with so few words. Millie Brown has even less less lines, and her performance is even more amazing.

Netflix has not yet announced a second season, but they should probably hurry up and do so while they can still afford the cast. To finish with a little economics, I’ll illustrate the problem with a little supply and demand analysis. I predict that Stranger Things will cause a dramatic increase in demand for Millie Brown. Ceteris paribus, as demand increases from D1 to D2, given that the supply of Millie Brown is fixed at 1, the result will be an increase in the price from P1 to P2. I don’t see any reason to believe that this trend won't continue into the foreseeable future. 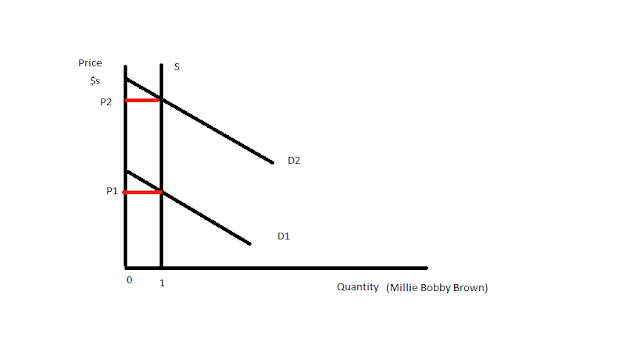 So, I wasn’t even able to get through this post without some economics. And, yes, it is a pretty crappy looking graph for a professional economist, but this is just a blog post about other things.
Posted by B. H. at 12:56 PM