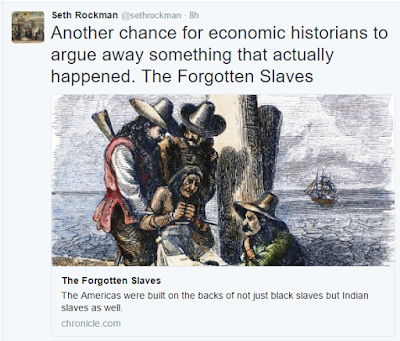 The message refers to this article on The Other Slavery in the Chronicle of Higher Education and suggests that economic historians will argue that slavery never existed among Native Americans.
The Chronicle article notes that
The Other Slavery: The Uncovered Story of Indian Enslavement in America by Andrés Reséndez “offers a capacious but defensible definition, including peonage; rebels sentenced to servitude; orphans and vagrants bound to service; victims of the mita (a forced labor quota imposed on Indian villages); and ostensibly free wage laborers whose employers never paid them.”

This definition of slavery, which includes a variety of institutions that were used to coerce labor from Native Americans got me to wondering which economic historians Rockman will be the first to try to argue this away. Perhaps he thinks it will be my friend Tim Yeager author of "Encomienda or Slavery? The Spanish Crown's Choice of Labor Organization in Sixteenth-Century Spanish America." The Journal of Economic History 55, no. 04 (1995): 842-859. Wait, that article must be an aberration, economic historians wouldn’t let something like that or Ricardo D. Salvatore’s "Modes of Labor Control in Cattle-Ranching Economies: California, Southern Brazil, and Argentina, 1820-1860." The Journal of Economic History 51, no. 2 (1991): 441-51 into the Journal of Economic History. Maybe Rockman suspects that the firt one to try to argue it away will be Melissa Dell author of "The persistent effects of Peru's mining mita," Econometrica 78, no. 6 (2010): 1863-1903. Yes, Dell seems like a good choice, publishing in Econometrica is about as economist as you can get. Actually, I am a little surprised that Rockman had not at least heard of that paper. It has received a lot of attention. I thought it might be known to even someone who was adamant about preserving his ignorance of the work of economic historians.

Rockman’s own flexibility in interpreting the past can also be seen in his reactions to the recent Chronicle article about slavery and capitalism.

Last week the article highlighted the deficiencies of the economists 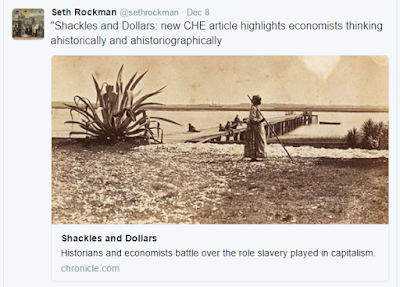 Today the Chronicle article was just one of three articles that tried to make slavery tangential to American economic development. 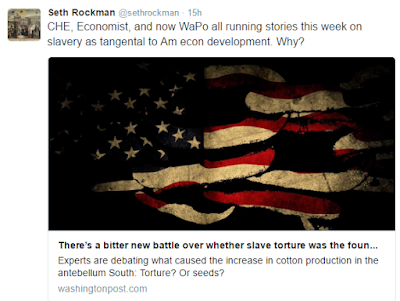 These guys are starting to make me feel like like Michael Palin in this Monty Python skit.
Posted by B. H. at 3:55 PM