Opponents of tax cuts claim that the large income tax cuts in the 1920s caused increased inequality and the Great Depression. For instance, Robert S. McElvaine writes in “I’m a Depression historian. The GOP tax bill is straight out of 1929” Washington Post’s PostEverything Perspective that

The crash followed a decade of Republican control of the federal government during which trickle-down policies, including massive tax cuts for the rich, produced the greatest concentration of income in the accounts of the richest 0.01 percent at any time between World War I and 2007 (when trickle-down economics, tax cuts for the hyper-rich, and deregulation again resulted in another economic collapse).

In 1926, Calvin Coolidge’s treasury secretary, Andrew Mellon, one of the world’s richest men, pushed through a massive tax cut that would substantially contribute to the causes of the Great Depression.

In that decade, the mass-production American economy became dependent on mass consumption. For it to work, the masses need a sufficient share of the national income to be able to consume what is being produced.
Republican policies in the ’20s instead pushed to concentrate more of the income at the top.

On the other hand, proponents of tax cuts have used the 1920s tax cuts (sometimes referred to as the Mellon after the Secretary of the Treasury Andrew Mellon) to illustrate how tax cuts can fuel so much economic growth that they generate increases in revenue. For instance, back in 2003, Veronique de Rugy argued that

The decade of the 1920s had started with very high tax rates and an economic recession. Tax rates were massively increased in 1917 at all income levels. Rates were increased again in 1918. Real GNP fell in 1919, 1920, and 1921 with a total three-year fall of 16 percent. (Deflation between 1920 and 1922 may also help explain the drop in tax revenues in those years, evident in Table 1).

As tax rates were cut in the mid-1920s, total tax revenues initially fell. But as the economy responded and began growing quickly, revenues soared as incomes rose. By 1928, revenues had surpassed the 1920 level even though tax rates had been dramatically cut.

She also notes that Between 1922 and 1929, real gross national product grew at an annual average rate of 4.7 percent and the unemployment rate fell from 6.7 percent to 3.2 percent.

I am not persuaded that either of these stories clearly establishes connections between cause (tax cuts) and effect (inequality, economic growth, Great Depression).

Both stories attribute a great deal of economic influence to a relatively small federal government. Prior to the Great Depression, the federal revenue typically accounted for less than 5% of GDP. 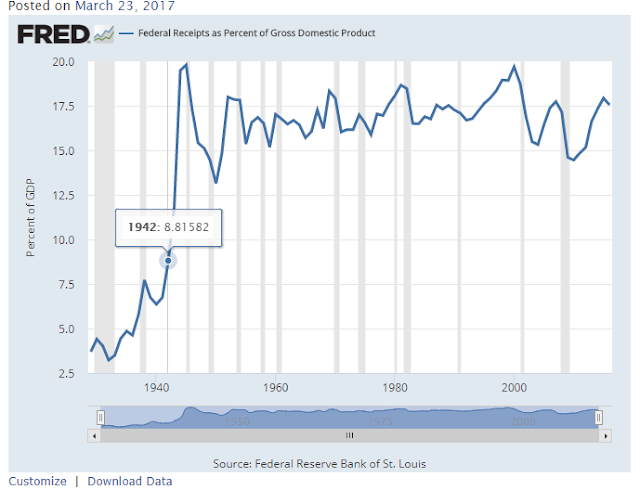 Moreover, income taxes accounted for only about half of federal revenue (Statistical Abstract of the United States for 1926 Table No. 169) Neither opponents or proponents of tax cuts explain  how changes that are so small relative to the whole economy could have effects as large as they suggest.

In addition, many of the changes during the 1920s were part of a reversion to pre-War patterns.The federal government lowered income tax rates during the 1920s, but it lowered them from the rates that had been imposed during World War I. By the end of the 1920s the top marginal rates were still almost double what they had been before the War.

Likewise, the available evidence suggests that inequality of both income and wealth increased during the 1920s, but they were also moving back toward the rates that had existed before the war. 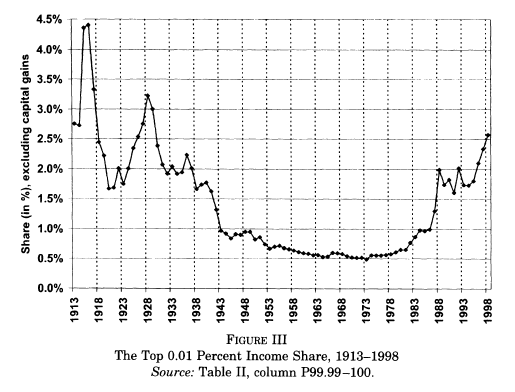 From a longer run perspective, the rapid decline of World War I and increase in the 1920s was a blip in a trend of decreasing inequality that was not isolated to the U.S. 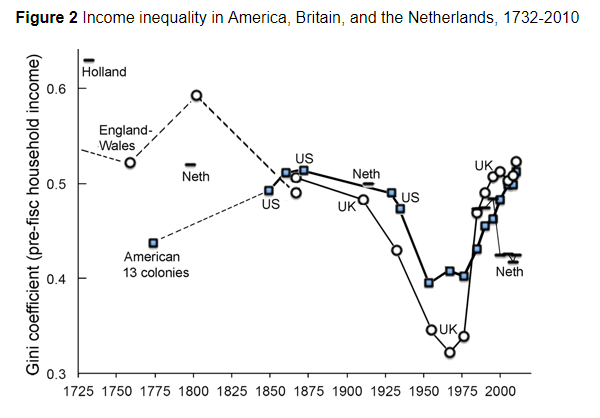 Even if there is not a clear connection between tax cuts and inequality, inequality did increase. Could that increase in inequality have led to underconsumption as an important cause of the Great Depression? It seems unlikely.

Although inequality increased during the 1920s, it was not immiserating working class people. After the recession of the early 1920s, real wages generally increased until the Great Depression.

Dramatic decreases in consumption expenditures were certainly a cause of the severity of the Great Depresion, but they were not an initiating factor. Consumption fell after a tightening of monetary policy and the stock market crash. Consumption fell because of decreases in wealth and income, but also because of increases in uncertainty about the future (Romer 1990, Romer and Romer 2013) and because of the need to reduce current consumption to make installment payments and avoid repossession (Olney 1999). The initial problems were exacerbated by continued bank failures and decreases in the money supply. Economic historians continue to explore the extent to which the problems in money and banking were the result of Federal Reserve failures or problems with the international gold standard. Given the small initial size of the federal government it should perhaps not be surprising that economists tend to find the causes of the Great Depression in monetary rather than fiscal policy.

The 4.7 percent rate of growth from 1922 to 1929 that de Rugy mentions is very sensitive to beginning and end dates. Much of it comes from very high rates at the beginning and the end. The annualized growth rate from 1923 to 1928 was a much less spectacular 2.8%. 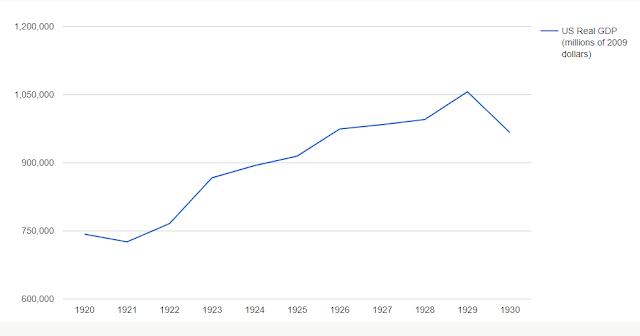 It seem likely that the lower rates simply meant it was no longer worthwhile for high income earners to incur the costs associated with tax avoidance. This was primary the reason that Mellon gave for the tax cuts.

I'll try to keep an open mind, but I am not yet persuaded that the Mellon tax cuts were able to generate very large macroeconomic economic effects despite the relatively small role of the federal government generally and the federal income tax specifically prior to the Great Depression.