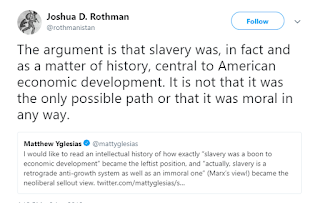 I'm not sure what Rothman means by "in fact and as a matter of history." Perhaps it is reference to Baptist, who prefers to avoid mixing facts with his history. In any case, Rothman seems to believe that the centrality of slavery to American economic development is not something a reasonable person could dispute. I regard myself as a reasonable person. So, on the off chance that someone might be interested in why I would dispute the claim that slavery was central to American economic development I'm going to ask that we take a closer look at the antebellum economy.

The argument against the centrality of slavery is based on two things: the assumption that Rothman is using the word central as it is defined in the dictionary and used by most people, and the available evidence on the antebellum economy. Central means that something is not just important but that it is of primary importance. The central character in a movie is not just an important character, she is the main character, the primary character. This is clearly what Baptist has in mind when he claims that  “the returns from the cotton monopoly powered the modernization of the rest of the American economy” and that "more than $600 million, or almost half of the economic activity in the United States in 1836, derived directly or indirectly from cotton produced by the million odd slaves― 6 percent of the total US population―who in that year toiled in labor camps on slavery’s frontier.” By the way, Baptist's tweet about it being easier to make claims about alternate universes than to come to grips with the past of this one was particularly appropriate given his expertise in making false claims. I and others have shown that Baptist's estimate is nothing but smoke and mirrors, a combination of numbers he makes up and bad accounting; see also Pseudoerasmus posts on Baptist. In addition, Olmstead and Rhode also show that Baptist made up  things that he claimed to have found in the testimonies of enslaved people.

By the way, if Rothman actually just means to say that slavery was important, I wish he would do that. I don't know anyone who disagrees with that. When, however, he claims that slavery was central to American economic development he is helping Ed Baptist to keep pedaling his snake oil.

To show why I believe that it is not accurate to state that slavery was central to American economic development I begin by reviewing the growth of total output, then I look at the composition of this output, and then I look at the regional distribution of income generated from this production. I argue that the fundamental problems with Rothman's claim are that no one thing was central, and claiming that "one big thing" was central gives a misleading view of economic development.

I should note that the argument is not new. It is essentially the same approach that has been used to counter exaggerated arguments about the role of cotton textiles in the industrial revolution (see McCloskey by way of Pseudoerasmus or the role of railroads in American economic development (see Fogel, but if you want the quick version McCloskey has a back of the envelope calculation of the impact of railroads in The Rhetoric of Economics). I've made essentially the same argument before. I'm hoping that by providing more detail about the antebellum economy that I might clarify the argument, make it more persuasive, and illustrate why most economic historians don't like "one big thing" theories of economic development.

Real GDP in millions of 1996 dollars 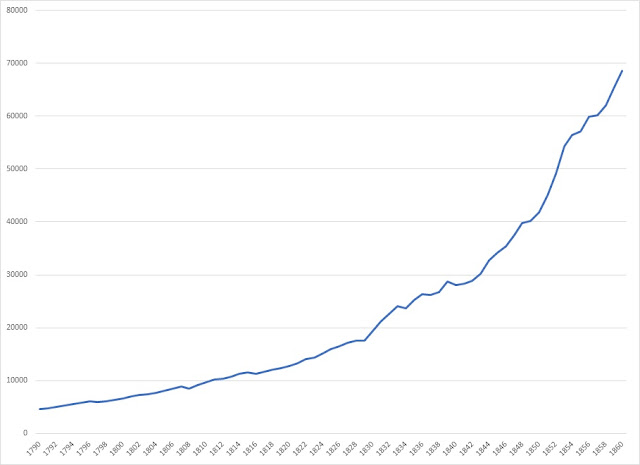 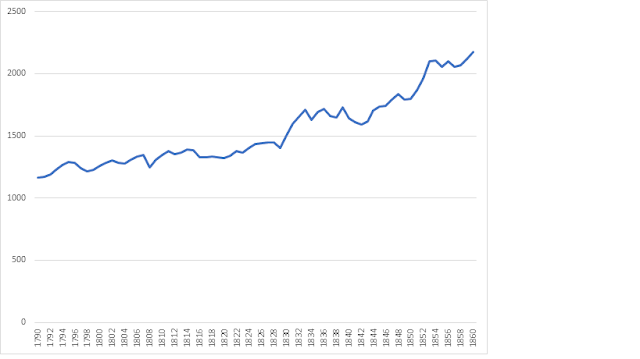 Keep in mind we are always talking about estimates.  Nevertheless, these are estimates; not just guesses. They are not simply made up numbers. If you want stuff that is just made up rather than based on actual historical research I suggest Ed Baptist’s work. Given these cautions we can look in more detail at antebellum growth, but it is important to keep in mind that when I say something accounted for about 3.9 percent of output in 1850, you should not ignore the about.

II. What Were People Producing?
What were Americans producing in the antebellum period? The table below shows how output was divided between commodities and services. Over the course of the nineteenth century the share of output accounted for by services was increasing, but commodities still accounted for nearly 60 percent of output on the eve of the Civil War. 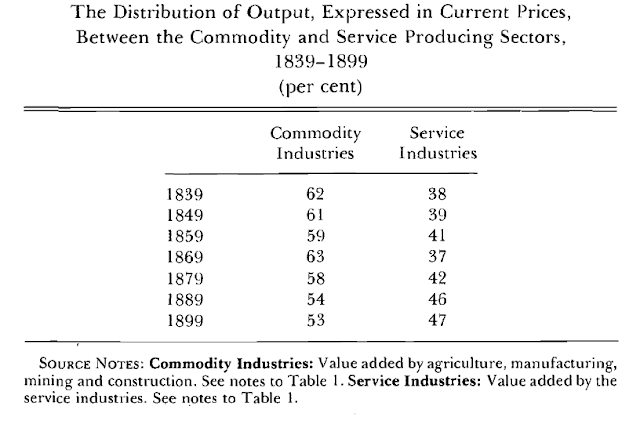 The next table shows the division of commodity output between different sectors. Over the course of the nineteenth century the  relative importance of manufacturing was increasing, but in the decade preceding the Civil War agriculture still accounted for the majority of commodity output. 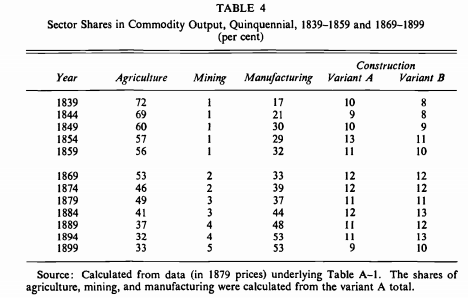 The following table shows how agricultural output was divided between livestock and crops. Unlike the previous tables, these tables show the value of output rather than the share of output. It is, however, apparent that agricultural production was split relatively evenly between crops and livestock. 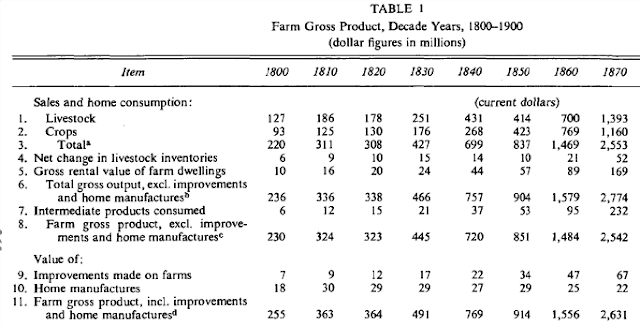 The next table also shows the value of output and provides a more detailed breakdown of agricultural production. 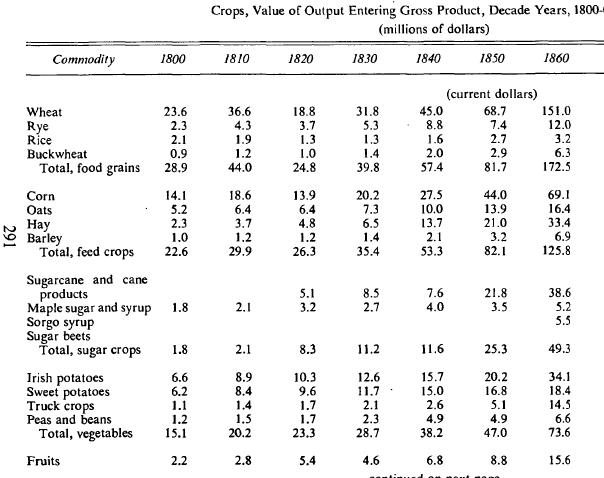 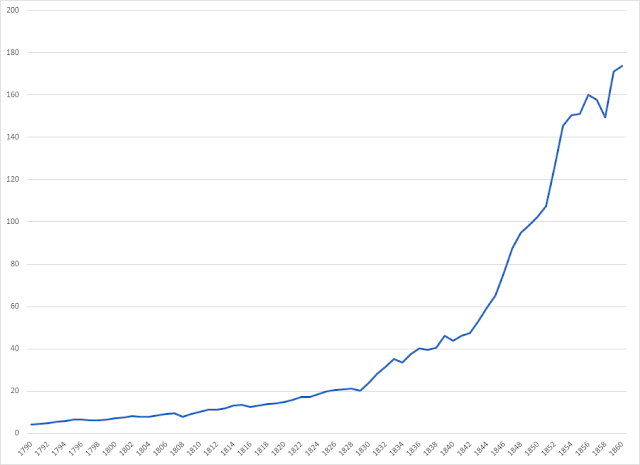 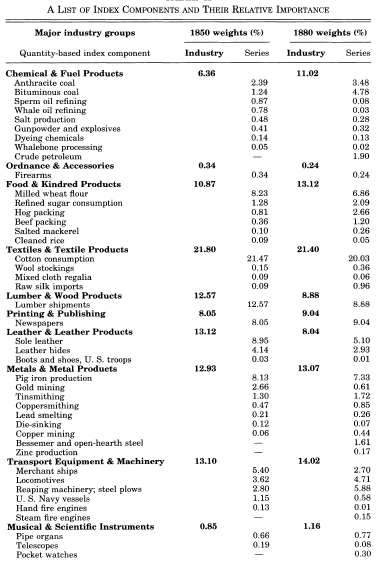 Employing the same sort of exercise as above, we find that cotton textiles, the largest component in manufacturing in the United States would have accounted for around 3.9 percent (.218 x.30 x .60 = .039) of GDP.

III. Where Were People Producing?
One could argue that the focus on cotton does not give an accurate estimate of the impact of slavery. Not all cotton was produced by slaves and slaves produced other things. However, a look at the regional distribution of income also does not support the primacy of slavery in economic development.

Regional variations in personal income reinforce the argument that it is probably not useful to regard slavery and the cotton that enslaved people produced as central to American economic development. The following table shows estimates of personal income generated in different parts of the country. 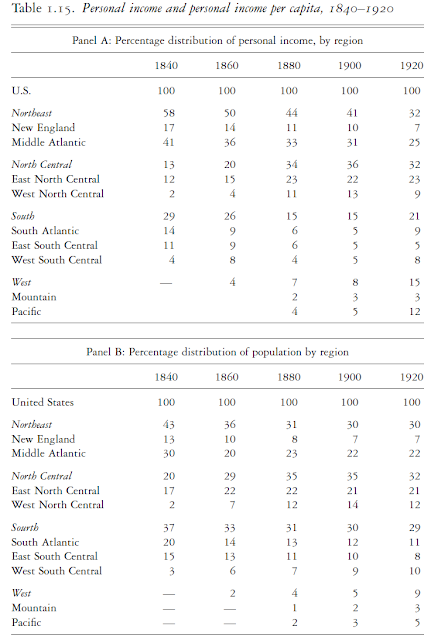 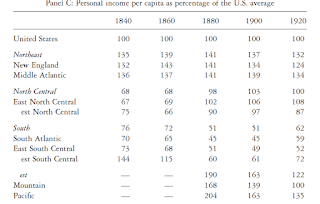 The North’s leading role in the economy was a consequence of both more people and higher per capita output. 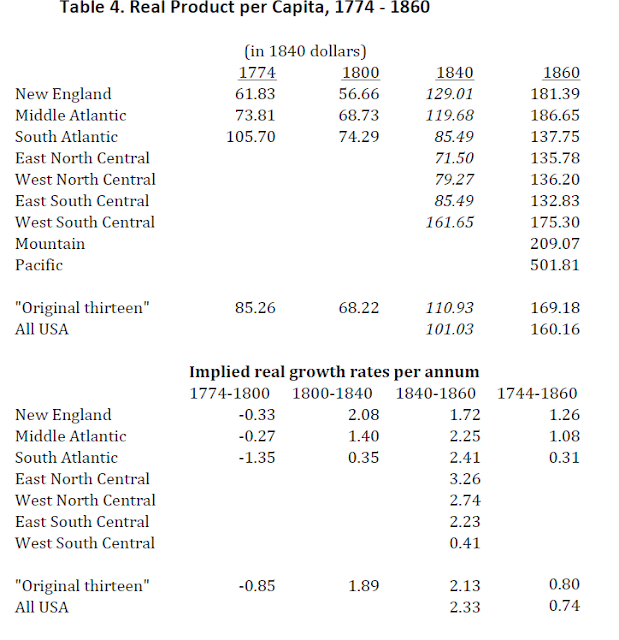 There is one final argument about the centrality of slavery that I should address. Some people claim that because of the spillover effects of slavery. This for instance is the idea behind Baptist's attempt to add up imaginary estimates to calculate the importance of cotton. There are two problems with this approach. First, you can do it with any good. For wheat I could count land sales, and the cost of transportation, and the cost of equipment, etc. Using Baptistian income accounting I could easily show that the amount of national output accounted for by grains and cotton was greater than the total output. How is that for an alternate universe? The other problem is that the evidence does not support the claims of strong interregional linkages during the antebellum period (see, for instance, this post).

Slavery was not central to American economic development in the sense that it did not power the modernization of the rest of the economy. The claim that slavery was central to American economic development is factually incorrect: slavery was important, but no one thing was central. The claim also promotes a misleading view of the process of economic growth. It suggests that economic growth is about one big thing. No one thing was big enough to drive economic growth, not railroads, not cotton, not cotton textiles. Explanations for economic development need to explain why people were investing and innovating in a lot of different things. Consequently, economic historians have tended to move away from one big thing theories of economic growth toward understanding the underlying causes of development, such as the emergence of a culture of growth (Mokyr), or the rise of bourgeois values (McCloskey)  or the evolution of growth promoting institutions (North, Wallis and Weingast).