The list of new working papers this morning from nep-his contained one by Richard Langlois, “The Fisher Body Case and Organizational Economics”, which examines the case of Fisher Body. Mary and I also examined the case in our paper “The historian’s craft and economics,” This blog post is both a concurring and dissenting opinion on the Langlois paper.

Fisher Body was an early manufacturer of automobile bodies that merged with General Motors in the 1920s. Both our paper and Langlois paper are, however, less about the story of the merger than they are about the story about the story. The story about the story begins when Klein, Crawford and Alchian published a paper in 1978 that used Fisher Body as an example of vertical integration driven by the holdup problem arising from asset specificity. For non-economists the terms may be unfamiliar, but the intuition is straightforward. The relationship between the automobile manufacturer and the manufacturer of bodies will be most profitable if they make investments that are fitted to each other. For example, the assembly plants are close to the body plants, or the body plants are designed to produce the sort of bodies the automobile company uses. In other words, you have assets, factory and equipment that are specific to a particular use and much less valuable in alternative uses. Hold up is the idea that once such investments have been made one side can try to exploit the other. “We are going to lower the price we pay for your automobile bodies, and you will have to accept it because no one else is going to buy those bodies that are designed for our cars.” That is a really simplified version, but you should get the idea.

In 1988, Klein described this explanation for the merger
“Fisher effectively held up General Motors by adopting a relatively inefficient, highly labor-intensive technology and by refusing to locate body-producing plants adjacent to general Motors assembly plant” (Klein, 1988: 202).

In 1988, Coase began to question this explanation, and he and several other researchers presented considerable evidence that the sort of holdup described by Klein never took place and that the merger was motivated by other concerns. Klein and Coase argued back and forth, and several other people jumped in. Ultimately Klein acknowledged that the hold up he described never took place.
Both Coase and Hansen and Hansen present the case as an example of economists’ failure to give sufficient attention to empirical evidence. Langlois on the other hand sees the entire episode as an example of the process of developing economic knowledge. Here is the conclusion of his paper 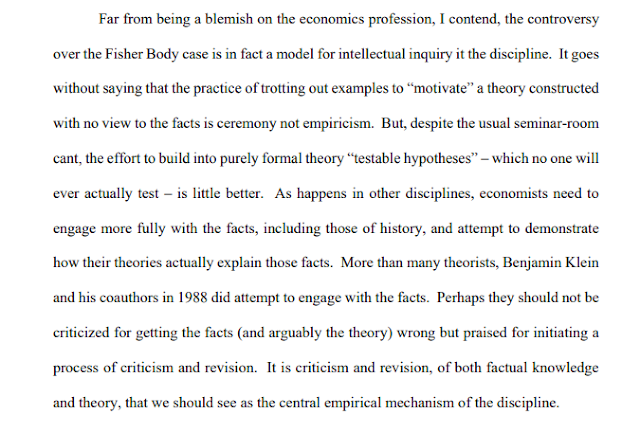 I agree with the overall thrust of Langlois argument but disagree with his specific case. I think there are numerous examples of cases where economists have developed explanations that turned out to be incorrect but were important because they generated debates and stimulated research that led to better understanding.

For instance, Doug North’s explanation for economic development in the antebellum period prompted research into agricultural production in the South and industrial development in the North that overturned his explanation and led to a better understanding of antebellum development. I think a similar thing is going on with Pomeranz’s work on the Great Divergence. Academics should not be criticized just for being wrong, especially if it leads to research that improves our understanding of something.

So what is the difference between North and Pomeranz, on the one hand, and Klein et al, on the other. First, Klein et al simply use Fisher Body to provide a little color to the theory. Their primary objective is not to understand the history of Fisher Body and GM. The work of North and Pomeranz on the other hand was driven by the desire to understand history. Second, North and Pomeranz based their theories on the available evidence, and some of their claims were later challenged by new and better evidence. The initial claim of Klein et al was not based upon the available evidence. There was already evidence in support of a contrary claim and no evidence in support of their claim that Fisher held-up GM. Finally, the responses to North and Pomeranz took us beyond where we were before they wrote. In contrast, the responses to Klein et al largely took us back to where we were before. According to Langlois

The use of Fisher by Klein et al is an example of trying to cram history into a theory rather than using theory to understand history. When I was studying economic history at the LSE in the early ‘80s I became increasingly interested in the use of economic theory in economic history. My advisor, Geoff Jones, told me that theory could be very useful but that I had to be careful not to try to make a historical story fit into a theory. Theory might help guide the search for evidence, but you have to go where the evidence leads you even if that doesn’t fit your theory. And you must tell the story honestly.  Although I went on to get a Ph. D. in economics rather than history, I have always tried to keep Geoff’s advice as a guiding principle. I think Klein et al would have been less likely to follow the path they did if they had been driven by a desire to understand Fisher Body.
Posted by B. H. at 9:30 AM