The other day my wife and I were talking about how people like to use phrases like “that’s just Econ 101”. Unfortunately, statements that precede that phrase are almost never Econ 101. It’s just whatever the person happens to think. I said that fairy tales should be re-written to include the phrase. “If you don’t make the shoes, elves will do it at night. That’s just Econ 101.” "He spins straw into gold. That's just Econ 101."

He says that it costs as much to build the 1,000th unit as it cost to produce the 10th. Economists call the additional cost of producing another unit of a good marginal cost. What he is describing is constant marginal cost. The problem is that he drew an upward sloping supply curve. An upward sloping supply curve means that higher and higher prices are required to get suppliers to provide additional units of the good. Why are higher and higher prices required? Because of increasing marginal cost. Gates description of constant marginal cost is thus inconsistent with his graph. This is actually a small problem because Gates could have just as well said that economists assume increasing marginal cost when drawing typical supply and demand curves.

His real point seems to be that there are now many goods for which there are large startup costs and near zero marginal costs. That is how he describes software production. He suggests that this is a new development that arises from the intangible nature of goods like software.

It is not actually a new situation, it does not arise from the product being intangible, and undergraduate economic textbooks have models of this situation.  There are many examples of products for which there are very large start up costs and relatively small (near zero) constant marginal cost. Railroads are not new, and they are not intangible, but they required large expenditures on construction and, once built, the additional cost of another passenger or another bushel of wheat was practically zero.  Insurance is intangible, but it is not obvious that it can be produced at zero marginal cost.

This is a graph from McCloskey’s Applied Theory of Price, which, by the way, is available to you at the amazingly low cost of your time to download it. 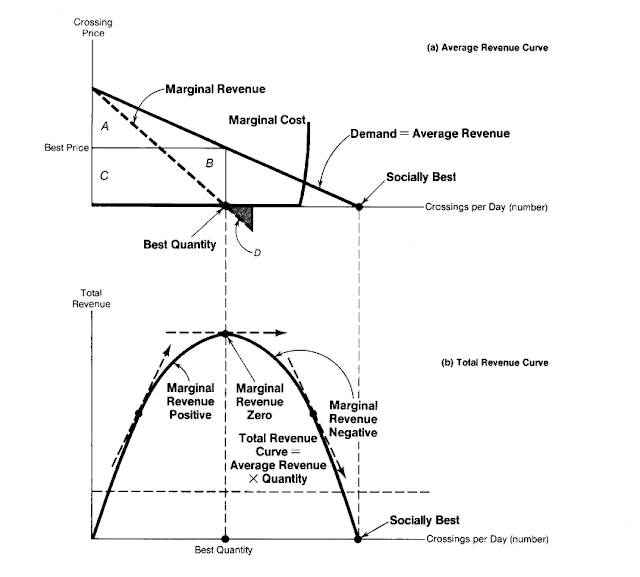 Gates does not address the demand side but these are generally firms that have some degree of market power. They face a downward sloping demand like the firm in the graph. Because other people do not regard other goods as perfect substitutes the firm won't lose all of its customers if it raises its price. The more the firm can convince people that other goods are not close substitutes for its good the greater its ability to raise its price above marginal cost. I some ways the more important thing is whether it can keep other companies from offering close substitutes. In other words, can it create what economists call barriers to entry. You can have a great idea, but if you can't keep other people from copying it you are not going to make great profits.

1. If you want to charge a price that is greater than marginal cost you need to convince people that other goods are not close substitutes for yours. Think of the old Porsche slogan: "Porsche. There is no substitute."