Why Tyler Cowen is wrong about the Wizard of Oz

This is part of Tyler Cowen’s conversation with Margaret Atwood at Conversations with Tyler
ATWOOD: Let’s talk about The Wizard of Oz.
COWEN: Sure.
ATWOOD: Now, there’s an absolutely core to the American psyche —
COWEN: It’s an economics movie. It’s about bimetallism, right? The yellow brick road is about the gold standard? This is not commonly known, but it’s true.
[laughter]
COWEN: It’s a monetary allegory, the whole movie.
ATWOOD: You think so?
COWEN: I know so.
ATWOOD: You know a lot of things. So, the Tin Woodman is what in it?
COWEN: He’s one of the people in the bimetallist debates. But there was a Journal of Political Economy article going through all of the parallels.
ATWOOD: And Dorothy is what?
COWEN: I think just the innocent American crying for relief.
ATWOOD: Are you buying any of this? I’m not.
[laughter]
ATWOOD: And the tornado is?
COWEN: Maybe depression, deflation.
ATWOOD: And Toto is?
COWEN: That one I’m stumped on.
[laughter]
ATWOOD: The flying monkeys are?
COWEN: William Jennings Bryan?
ATWOOD: Okay. Well, here’s the really interesting thing about Wizard of Oz. In The Wizard of Oz, the male wizard is a fraud, and all of the other male characters are missing something.
COWEN: That’s right.
ATWOOD: Yes. But the witches are real. Now, Tyler, I’m going to tell you a story.

Someone posted this part of the conversation on twitter and I replied by saying it should be filed under things that Tyler knows that are not so and added a link to a paper I published on the Wizard of Oz. Cowen replied,

I'm sticking with the JPE on this one, sorry!

I asked why, but he did not explain.

Cowen does not seem to be particularly familiar with the JPE article. A link was added in the transcript, but the author, Hugh Rockoff, isn’t mentioned in the interview.  Rockoff’s paper does not have anything to do with the movie. The allegory story doesn’t work well with the movie because of changes from the book. For instance, in the book the slippers were silver and the Emerald City was fake; it only looked emerald because visitors were forced to wear green glasses. Moreover, Cowen does not seem to know what the characters in the Wizard of Oz are supposed to represent in this allegory. In Rockoff’s paper the Tin Woodman is the working man and the Cowardly Lion is William Jennings Bryan. Yet Cowen does not just think that it is an allegory he knows it. After all, it was published in the Journal of Political Economy.

I really am curious why he is sticking with the JPE because I have a hard time seeing how anyone can read both the original JPE paper and my paper and still find the monetary allegory interpretation persuasive. Academics can have legitimate disputes, but at some point the amount of evidence falling on one side of the dispute should be able to tip the scales even if the original paper was published in JPE.

For those unfamiliar with the interpretation of Oz as a monetary allegory it goes something like this:

“In 1964, Henry Littlefield, a high school history teacher, described what appeared to be numerous coincidences between The Wonderful Wizard of Oz and the Populist movement of the late 19th century. Once viewed through a Populist lens, the symbolism of the book appears incredibly obvious. The Scarecrow represents farmers, the Tin Woodman represents industrial workers, and the Cowardly Lion represents William Jennings Bryan.' Dorothy was told to follow a yellow brick road-the gold standard. People in the Emerald City were forced to look at everything through green glasses-greenbacks. The silver shoes-coinage of silver-really had the power to take Dorothy home. Oz itself refers to the abbreviation for an ounce of gold.” (Hansen 2002, 255)

What evidence does Rockoff provide in the JPE paper? 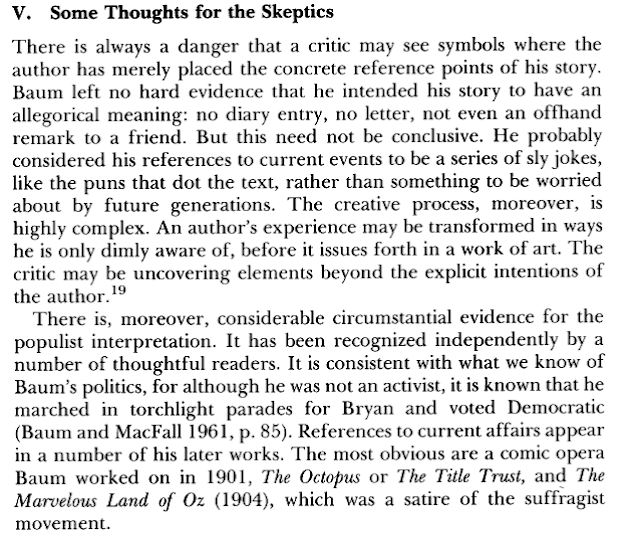 Rockoff states that there is no direct evidence, and in my paper I argue that here was no circumstantial evidence either. It was not discovered independently numerous times. No one noticed in until Henry Littlefield came up with the idea as an exercise to get high school students thinking about the Populist movement. What is known about Baum’s politics also does not support the argument that it was written as a monetary allegory (see Hansen 2002, 257-260).

Cowen added in another tweet reply that he was also going with this book review by J. Jackson Barlow. But neither Barlow nor the authors that he reviews argue that the story was written as a monetary allegory. Barlow’s interpretation is consistent with Baum’s claims that he was writing a fairy tale for modern times.

Read Hugh’s paper and read my paper (it is short and easy to read) and decide for yourself.

Atwood's insights were more consistent with what is known about Baum: one of the few political issues that he really cared about was the suffrage movement. By the way, he was married to Maud Gage, daughter of Matilda Joslyn Gage.