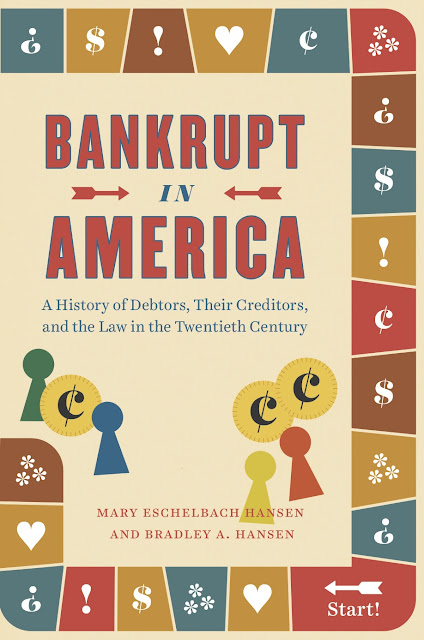 Lee J. Alston, Indiana University
“Bankrupt in America is a tour de force analysis of bankruptcy legislation and its impact over the twentieth century. It shows the interplay among state and federal legislation, economic conditions, social stigma, and the role of certain individuals in accounting for changes over time and across states. The authors offer an institutional and cliometric account that deftly draws on economics, history, law and political science. It will become the resource for many scholars, and I hope legislators.”
Hugh Rockoff, Rutgers University
“Mary and Bradley Hansen have presented us with a superb economic history of personal bankruptcy laws in the United States in the twentieth century. They have collected large quantitative databases and subjected them to careful statistical analysis—cliometricians will applaud—but they have also analyzed the interest-group politics that shaped the bankruptcy laws, and provided us with numerous stories of individuals coping with debt and bankruptcy which make the economic analysis come alive. Bankrupt in America will become a classic—the book that generations of economic historians will cite as the authoritative source. But the book is also timely, as we have come to realize that the social safety net, of which the bankruptcy laws form an important part, has become increasingly frayed.”
David Skeel, University of Pennsylvania
“Bankrupt in America is a wonderful combination of history, institutional analysis, and empirical economics, all in the same book. The book is full of important new insights into twentieth and early twenty-first century American consumer bankruptcy, including the authors’ remarkable discovery that the principal determinants of consumer bankruptcy have often been the supply of consumer credit and the stringency of state garnishment laws, rather than changes in bankruptcy law itself. Bankrupt in America is destined to become an empirically rigorous companion to classics of American consumer finance such as Lendol Calder’s Financing the American Dream.”
Posted by B. H. at 4:19 AM