Some Thoughts on the 1619 Project


I’m not sure how much of an impact the 1619 Project will have on the public, but it has certainly gotten a lot of academic historians wound up. Historians at the American Institute for Economic Research and the World Socialist Web Site have both criticized the Project. Talk about politics making strange bedfellows. Peter Coclanis is the latest to criticize it. And, of course, everyone with a Twitter account has an opinion. More than a few seem to be of the opinion that the entire project is tainted by bias and invalid. Others are certain that the biases of the critics are the problem.

I’m not an opponent of the project. I agree with Beckert and Rothman that “American slavery is necessarily imprinted on the DNA of American capitalism,” And there is a lot of recent and ongoing research that demonstrates the fruitfulness of this research program. For a small sample of recent work related to economics and politics see Acharya, Blackwell and Sen;  Yeonha Jung,; and Jhacova Williams. And some of the quibbling about things like whether or not the people transported against their will from Africa and sold in Virginia were "slaves" just does not make sense to me.

That said, I do think there are some significant errors in the Desmond essay and the shorter essays that were incorporated into it. These are the essays most closely related to American economic history, my own field of research and teaching. What I mean by errors are claims that are not supported by the available evidence. There are other things I could argue with. For instance, Desmond talks a lot about capitalism, but doesn’t tell us what capitalism is. This is a problem because there are a lot of different definitions of capitalism and people disagree strongly about them. Personally, I think this renders it more of a distraction than a useful category of analysis. But that is something people can argue about. What I mean by error here are specific claims that are not supported by evidence.

Quoted material is in bold.


Describing the Panic of 1837, Desmond writes that “When the price of cotton tumbled, it pulled down the value of enslaved workers and land along with it. People bought for $2,000 were now selling for $60. Today, we would say the planters’ debt was “toxic.”

The figure below shows the price of slaves during the antebellum period (Historical Statistics of the United States Millennium Edition Series (series Bb211 and Bb212).  It has both the average and the price for prime field hands. There is a large decrease in prices after the Panic of 1837, but nothing on the order of what Desmond suggests. The high figure that Desmond cites is well above the highest price for prime age field hands, and the lowest price is well below the lowest average. It may be that Desmond has evidence that would support this claim, but there is nothing indicating what the claim is based on. 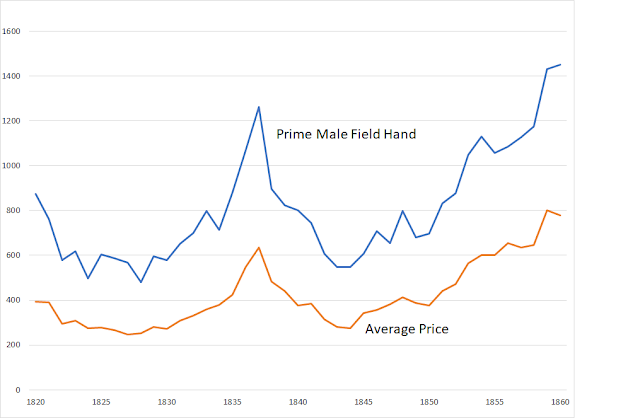 Desmond suggests that “When an accountant depreciates an asset to save on taxes or when a midlevel manager spends an afternoon filling in rows and columns on an Excel spreadsheet, they are repeating business procedures whose roots twist back to slave-labor camps. And yet, despite this, “slavery plays almost no role in histories of management,” notes the historian Caitlin Rosenthal in her book “Accounting for Slavery.” Since the 1977 publication of Alfred Chandler’s classic study, “The Visible Hand,” historians have tended to connect the development of modern business practices to the 19th-century railroad industry, viewing plantation slavery as precapitalistic, even primitive. It’s a more comforting origin story, one that protects the idea that America’s economic ascendancy developed not because of, but in spite of, millions of black people toiling on plantations. But management techniques used by 19th-century corporations were implemented during the previous century by plantation owners. It was rational, capitalistic, all part of the plantation’s design.

This is drawn from the work of Caitlin Rosenthal. I really like Rosenthal’s book, but she is very explicit that she is not telling an origin story. She demonstrates how slave owners developed management practices to increase their profits and how those ideas spread. But she states that she does not claim that they were the source for modern management practices.

Desmond also claims that “A majority of credit powering the American slave economy came from the London money market.
I don’t think we know this. We know that some English credit went toward financing the shipment of cotton, as well as the purchase of land and slaves, but, to the best of my knowledge, no one knows what proportion of credit originated in England. It may be true that most of the money came from London, but we do not know. If Desmond actually has evidence to support this I hope that he publishes it.

Writing about New York City, Tiya Miles states that “As the historian David Quigley has demonstrated, New York City’s phenomenal economic consolidation came as a result of its dominance in the Southern cotton trade, facilitated by the construction of the Erie Canal. It was in this moment — the early decades of the 1800s — that New York City gained its status as a financial behemoth through shipping raw cotton to Europe and bankrolling the boom industry that slavery made.”

Quigley argued for the importance of the South to New York’s economic development in “Southern Slavery in a Free City: Economy, Politics and Culture,” in Slavery in New York, edited by Ira Berlin and Leslie Harris, The New Press, 2005 (companion volume to major exhibition at the New-York Historical Society, 2005-2007). In this essay, he does make strong claims about the role of slave produced cotton in the economic evolution of New York City. For instance, he writes:
“Slavery and slave produced goods helped propel the city’s prosperity throughout the early nineteenth century. The records of the city’s cotton exchange and individual trading houses illuminate the centrality of the Southern trade to New York’s booming antebellum economy. Alongside the opening of the Erie Canal in the 1820s, local merchants’ success in establishing and maintaining long term business ties to the Southern planter class fueled New York’s financial ascendancy. The city’s merchants came to dominate the export market for cotton and served as critical middlemen for the domestic cotton trade, and metropolitan tradesmen disproportionately benefited from Southern consumerism by mid-century” (page 266).

Guigley relies mostly upon other secondary sources, particularly the work of Richard Albion and an essay by Lampard (Lampard, Eric E. "The New York metropolis in transformation: history and prospect. A study in historical particularity." The Future of the Metropolis. Berlin: Walter de Gruyter, Inc (1986): 27-110). But these citations do not provide evidence that would support the conclusion that New York’s dominance of the cotton trade propelled its economic ascendancy. In fact, it is difficult to make a case that New York dominated the cotton trade.

Consider the following graphs. The first shows the number of bales exported from leading ports (Donnell, Ezekiel J. Chronological and statistical history of cotton. 1872.). The second shows the exports and imports of New York and New Orleans in millions of dollars (Albion Rise of New York Port Appendices II and III). Most cotton was exported from New Orleans. And its share was growing over the antebellum period. The trade that New York dominated was imports (and immigration). Imports, not exports, were what made New York the largest port in the United States. 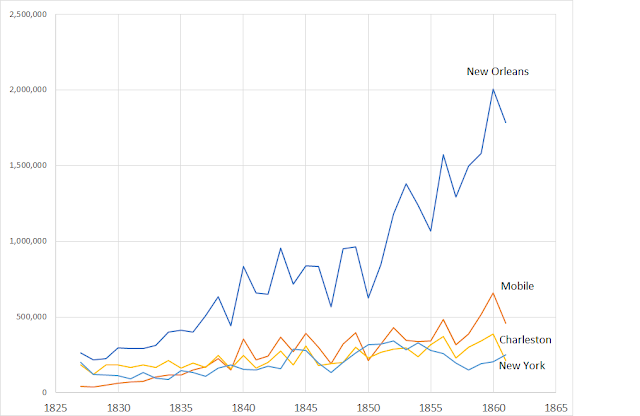 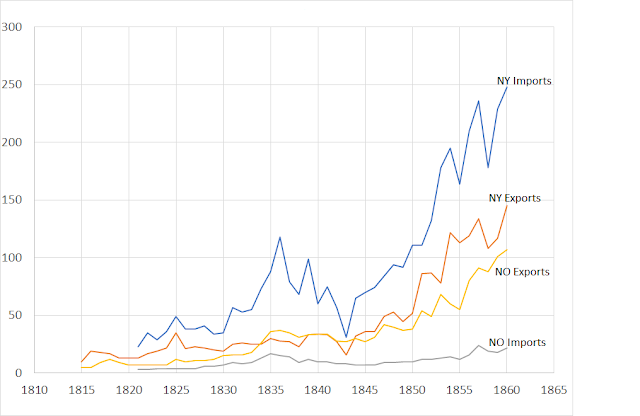 Some people will argue that the South needed to use New York, ships, banks, and insurance companies? But the size of these connections have been asserted rather than established with evidence. Again, this is one of the areas in which we know there were connections, but to the best of my knowledge no one has estimated the extent of these connections or their relative importance to the New York economy. It should, however, be noted that the South was not entirely dependent on the North, let alone New York. Much recent research has noted the role of significance of financial development in the South. As Desmond noted in his essay, New Orleans was one of the most banked cities in the country. Richard Kilbourne concluded that much of the finance for slave purchases in Louisiana came from local sources. Sharon Anne Murphy and Karen Ryder found that insurance companies in the South took a leading role in the sale of policies to insure enslaved people. People and corporations in New York were involved in the cotton trade (and tobacco, rice and sugar) but we don’t have good estimates of the size of this involvement. Given margin of imports over exports and the fact that most cotton left through New Orleans it is hard to support a claim that New York’s economic rise was du to its dominance of the cotton trade.

Finally, I do have to say that I think that presenting Edward Baptist as reliable authority on the history of slavery in America is also  an error because it is not supported by the available evidence. See here for details.
Posted by B. H. at 12:46 PM